Risk Trends are Holding, Just Don’t Look at the Headlines

A quick overview of ‘risk trends’ this past session would offer up continuation of this week’s advance, but conviction was reigned in even further. My preferred measure of over-leveraged risk assets, the US equity indices, summed it up nicely through a successively doji candle from the S&P 500 and the Dow’s continued struggle to overtake 26,250. The former managed to set a new multi-month high, but the activity after the open suggests there is little intent to rouse a self-sustained cycle of speculative momentum. For the latter, I don’t consider the range resistance to carry the kind of weight that would reject the market’s bullish ambitions nor spur momentum should it break. We are seeing speculative assets traverse ranges with a greater degree of volatility and thereby a more fluid interpretation of technical boundaries. That said, these are not the kind of conditions that set a strong stage for ‘a return to record highs’ – much less a move deeper into uncharted bullish territory. If there we are to see a lingering state of restrained sentiment, I would expect more progress to be found in assets that still have a considerable discount from their record highs. The rest of world equities ETF (VEU) is at the midpoint of its 2018 bear trend.

In contrast to speculative potential, the most useful measure of our current condition between fundamental conviction and risk appetite are US government bond yields. Traditionally correlated to risk trends through a safe haven status and distorted by central bank activity, the aggregate yields of US, UK, German and Japanese 10-year government bonds have established an extraordinary divergence to the S&P 500. This past session, the aggregate posted another sharp rally – slightly outpacing Monday for the biggest single-day rally since September 12, 2017. It is the connection this measure has to underlying growth that makes it particularly interesting. Operating on day’s performance, we would assume that the outlook for the economy improved Wednesday when exactly the opposite was true. The service sector activity updates for March showed some unwanted tension on developed economies where this venue of output accounted for the bulk of GDP. Far more direct in its warning though was the WTO’s updated growth forecast. From a previous forecast of 3.7 percent expansion, the group slashed that figure to 2.6 percent. Trade wars and Brexit were quoted as contributions to this fear, while markets are once again pushed to consider what kind of backup (such as the limited monetary policy support from central banks) we can rely upon to dampen the negative speculative implications this carries. 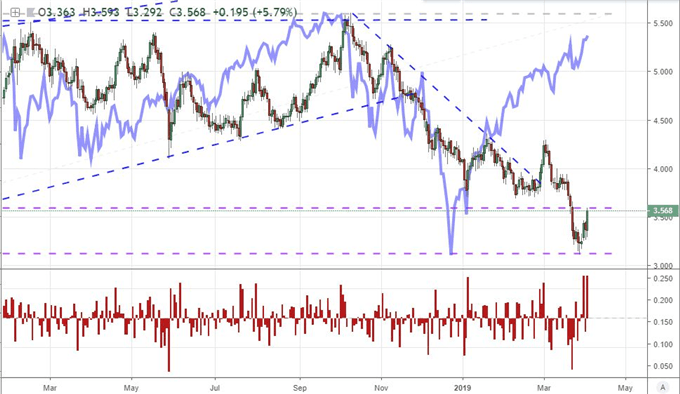 A EURUSD Bounce with as Little Potential as a Breakdown

In the FX market, the most pressing technical level to keep track of is EURUSD’s 1.1200 floor. The multi-month support carries meaningful technical weight all on its own through the Fibonacci levels pulled from the lifespan of the Euro as well as the bull trend from 2015 to 2018. However, the influence runs deeper than the simple historical reference. It is the lower bound to one of the narrowest ranges on this long a period of congestion in the pair’s record and the reflection of a serious fundamental conflict between the two most liquid currencies in the world. We can perhaps attribute some of the motivation behind this last-minute aversion from a breakdown to the divergence in performance between the Eurozone and US service sector updates. The former’s update slowed modestly to 51.6 while the US ISM non-manufacturing update sunk to a 19-month low 56.1. If this is the root of the EURUSD’s rebound, it is unlikely to last. Neither economy is in good standing, but Europe’s is under greater pressure.

Perhaps the fundamental focal point will shift over the coming days to emphasize monetary policy. The upcoming session will carry the European Central Bank’s (ECB) meeting minutes from the last gathering – where they were unmistakably dovish – and Friday brings a Fed speculation favorite in the monthly NFPs payroll report. If that proves true, we are likely to see the EURUSD stall out one way or another by Thursday afternoon. The sheer interest afforded to the jobs data is consistently a powerful sedative in the days preceding its release. In the meantime, that puts retail traders in a good position. Partial to congestion, technicals and reversals; these are the conditions that actually suit their natural inclinations as we have seen in the retail positioning figures. It is unclear what can earn the inevitable break from this critical currency pair – whether bullish or bearish. Relative monetary policy, relative growth and relative financial stability are big-picture leading candidates. Whichever takes command though, these two critical currencies are relying on each other for a clear view. And where, EURUSD heads, the global financial system will feel the impact. 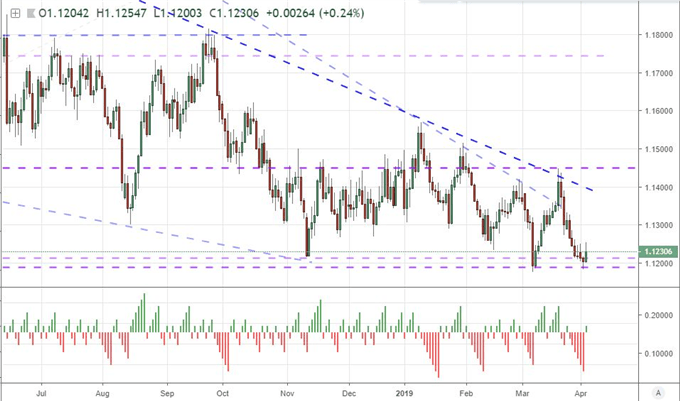 As we await the global picture from US equities, yields and EURUSD; we have a more targeted theme that finds its fundamental reach spreading out to near-systemic concern levels: Brexit. As the WTO added its assessment of the pain that can come from a ‘no deal’ outcome, the Bank of England Governor Mark Carney repeated his warning that the disruptive outcome’s risk of coming to pass was ‘alarmingly high’ – while also arguing that the group’s feedback was not fearmongering. In government news, Prime Minister Theresa May met with opposition leader Jeremy Corbyn as they attempt to find compromise that breaks their respective red lines. Meanwhile, Parliament voted to ‘allow’ for the attempt to pass legislation that would prevent a no-deal outcome on the April 12th deadline. Another interesting development in the House of Commons, a 310-310 tie arouse for the first time in decades on a proposal for another round of indicative votes to find an alternative to May’s Brexit effort on Monday. Speaker John Bercow broke the balance, shooting down the proposal. If you are trading the Pound, continue to expect volatility in the devotion to headlines with a particular lack of trend development until the Brexit course is clear. That warrants for most, short-term range trading or simply standing on the sidelines.

In these continued transitional phases for global themes and against the backdrop of unresolved fundamental event risk (like Brexit) there remains considerable value in those currencies that are innately disconnected. The Swiss Franc (EURCHF), Aussie and Kiwi Dollars are three such players worth keeping tabs on for those looking to diversifying beyond the core majors. Looking much further out, Bitcoin has found some extension on its Tuesday rally. The benchmark crypto rallied inexplicably through the Asia session with an estimated $50-100 million in bids pushed into the market in an unmistakably planned effort to build up a long position. Perhaps we have found a reason for the sudden interest this past session: front running news. The SEC released guidance on whether cryptocurrency and its exchanges were foundation for investment. Through the legalese, the answer is ‘it depends’. There is an air of legitimacy that follows the update, but it remains to be seen whether this spurs another full-tilt investment. It certainly isn’t a speculative rush as before, we can see that in retail CFD positioning. Finally, as we contemplate the state of the financial system with cryptocurrency rising as central banks deflate their own currencies while simultaneously charging speculative assets, we find gold consolidating overtly on support that stands as a head-and-shoulders ‘neckline’. We discuss all of this and more in today’s Trading Video. 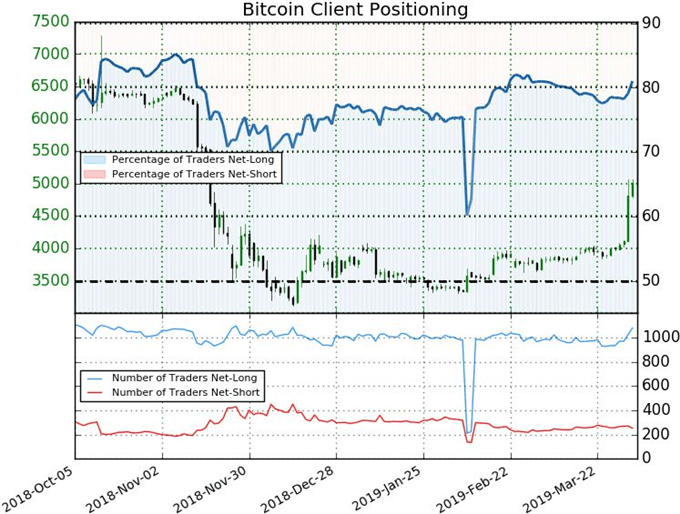