– It was a fairly mundane Q1 across the currency space despite a screaming start to the year, indicated by Yen-strength around the open that dissipated over the next few months. EURUSD has now been in a range-formation for the past five months.

– On the US Dollar side of the coin, USD remains in an ascending triangle formation that’s been building since last year. This will generally point to bullish breakout potential, and this week’s economic calendar is loaded with USD-items with high-impact data set to be released each day this week.

US Dollar Holds Resistance at Mid-February Highs to Start Q2

The US Dollar has opened Q2 by holding at a key area of resistance, and this is the same zone of prices that held the highs in the currency in mid-February that runs from 97.21-97.30. The mid-February inflection saw prices sink down for a re-test of the 96.00 level, but that support held late in the month to allow for another topside advance in March. That’s when the yearly high at 97.71 came back into play and held a resistance inflection for the third time in the past five months.

The big question around the US Dollar as the door opens into Q2 is how motivated might bulls remain to be? Prices remain in a longer-term ascending triangle formation, the entirety of which was traversed by March price action: Following that resistance hit at the annual high, prices sold-off for the next week-and-a-half until support came-in off of the bullish trend-line. This showed-up shortly after the FOMC rate decision in March, and since then prices have been on a bee-line higher.

In this first week of Q2, the economic calendar is loaded with USD-items, with high-impact US data set to be released Monday, Tuesday, Wednesday and Friday. The Non-Farm Payrolls report at the end of the week should be especially interesting following the dismal headline print that showed-up in March for February data. This was a key driver behind that resistance inflection at 97.70 last month, and that theme of USD-weakness lasted all the way into the FOMC rate decision.

Will that 20k print be revised higher? Will that trend continue with another dose of disappointment? Or, will jobs numbers recover, highlighting last month as a one-off in a streak of otherwise healthy employment prints?

DailyFX Economic Calendar: High-Impact for the Week of April 1, 2019 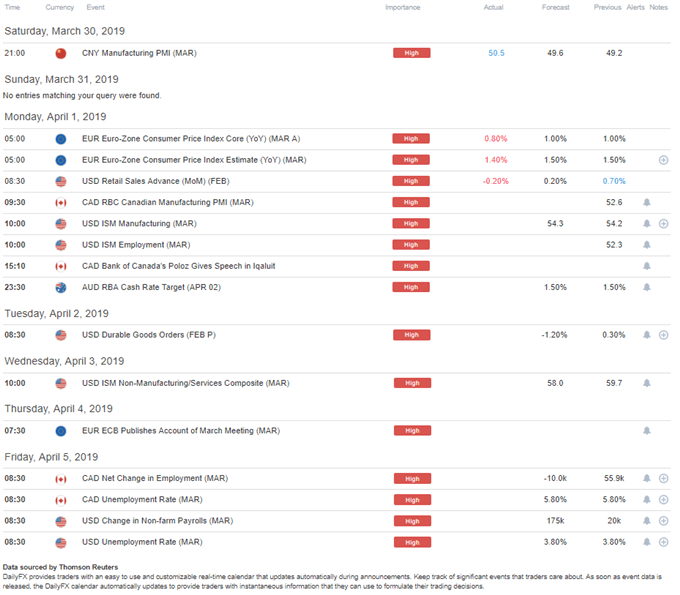 On the other side of the US Dollar’s strength, EURUSD weakness remains a potential theme as the door opens into Q2. Prices in the pair spent the bulk of Q1 trading inside of a range that had set-in during November and December. This technical impasse lasted through a variety of fundamental themes, including the announcement of stimulus exit at the ECB, a debt-stand off between Italy and Brussels and, last month, an announcement of a fresh round of stimulus.

The big question for Q2 is whether bears might be able to garner bearish breakouts below this big zone of support. The price of 1.1212 is especially interesting, as this has been a key component of that support zone, especially of late, and this is the 61.8% Fibonacci retracement of the ‘lifetime move’ in EURUSD. That price helped to hold the Friday low and since, prices have been bouncing.

This week has already seen a bit of Euro data with a disappointing CPI print; but Thursday brings a far more interesting item with ECB minutes, taken from the meeting from which the bank triggered another round of TLTRO’s. The ECB had also cut growth and inflation forecasts at that meeting, so it doesn’t appear as though there was much for optimism. But – might this be the catalyst that bears need to tip prices-lower after more than five months of range-bound behavior?

The final month of last quarter was marked by a re-appearance of risk aversion themes. US equities began to pullback after a really strong start to Q1, so strong in fact that it was the S&P 500’s strongest quarter in nearly a decade. But it was around the FOMC rate decision that risk aversion began to look a bit more opportunistic; and as stocks tipped-lower, so did USDJPY.

USDJPY had tracked that risk aversion theme fairly well in Q1: Q4 fear remained around the yearly open, but that theme was soon offset by USDJPY bulls, who then spent the next two and a half months building a very clean up-trend in the pair.

The post-FOMC sell-off drove prices in USDJPY down to a key area of support that runs from 109.67-110.00; and that zone has helped to hold the lows as themes of recovery built-in last week. Q2, however, has started off a bit differently. The pair gapped-up to a fresh weekly high and that has already been filled as prices tipped-back for a test of support in the area that held last week’s highs. That zone runs from 110.75-110.86, and this may keep the door open for short-term bullish continuation.

This remains a pair of interest for those looking for a continuation of the risk-on themes that ran so loudly during last quarter.

Similar to the above, EURJPY has tracked risk themes fairly well so far in 2019. The pair plummeted in the opening days of the year as risk aversion themes remained of interest following a brutal Q4. But, as stocks recovered, so did EURJPY. The pair broke-lower after the FOMC-fueled equity sell-off, finding a bit of support at the late-January swing-lows. The 125.00 area has continued to hold the highs similar to last week; and a hold here can keep the door open for risk aversion themes.