The European Central Bank provided no new information today that might drive the EURUSD price in the statement following its as-expected decision to leave all its key interest rates unchanged. However, it is still possible that ECB President Mario Draghi could say something market-moving in his upcoming press conference.

Attention will focus on any more news about its proposed new series of quarterly targeted long-term refinancing operations (TLTRO-III), due to start in September and end in March 2021, each with a maturity of two years and designed “to preserve favorable bank lending conditions and the smooth transmission of monetary policy”.

Euro traders should also watch out for any indication of a tiered deposit rate system, similar to those in Japan and Switzerland, although that is unlikely for now, and for any downgrades of its economic forecasts. The International Monetary Fund lowered its growth forecasts sharply for the Eurozone Tuesday as Germany stagnates while Italy hits the buffers.

Economic growth in the Eurozone could grow by just 1.3% this year after a 1.8% expansion in 2018, the IMF said. Further downside risks could stem from the current trade dispute between the US and the EU that could lead to US tariffs on $11 billion worth of EU imports.

As for the Euro, EURUSD has been climbing modestly over the past week and could extend its advance unless Draghi hints at easier monetary policy ahead in his news conference that starts at 1230 GMT. Currently, the ECB is expecting rates to be left unchanged at least through the end of this year. 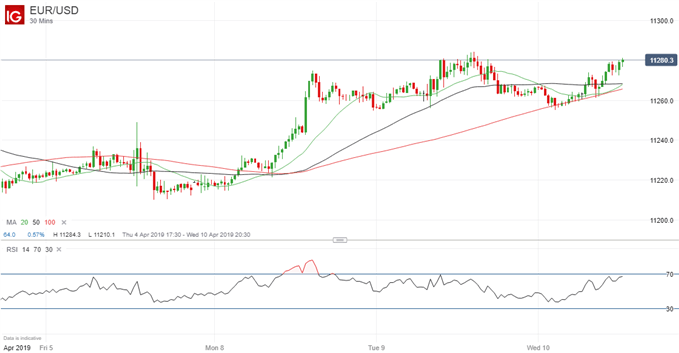