EUR/USD trades to a fresh weekly-high (1.1324) even though the European Central Bank (ECB) shows a greater willingness to insulate the monetary union, and the failed attempt to test the 2019-low (1.1176) may spur a larger rebound in the euro-dollar exchange rate as it tracks the range-bound price action from the previous month. 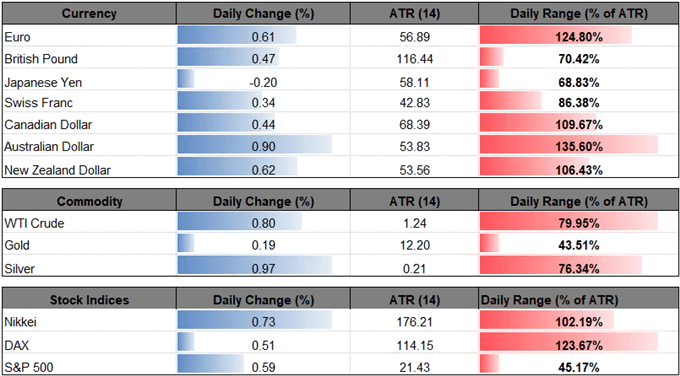 The Euro appears to be unfazed by the ECB meeting as EUR/USD extends the advance from the monthly-low (1.1184),and it seems as though the central bank will continue to endorse a wait-and-see approach for monetary policy as the Governing Council pledges to keep euro-area interest rates ‘at their present levels at least through the end of 2019.’

With the Targeted Long-Term Refinancing Operation (TLTRO) scheduled to launch in September, it seems as though the ECB will stick to the sidelines over the coming months, but it remains to be seen if the Governing Council will alter the forward-guidance at the next quarterly meeting on June 6 as board member Ignazio Visco insists that the central bank will ‘take a view on the parameters of the TLTROs and associated with that obviously all that has been discussed.’ 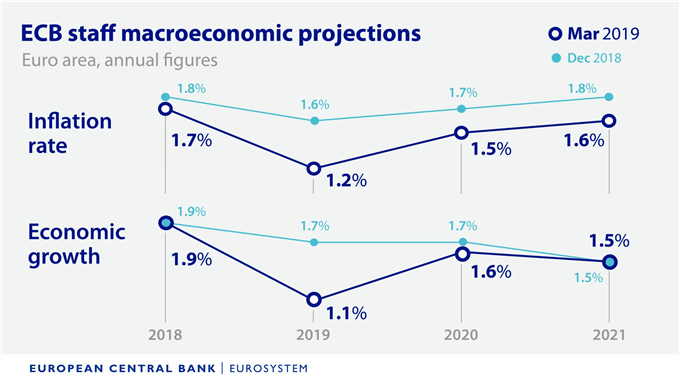 The comments suggest the ECB will keep the door open to further support the monetary union as the central bank struggles to achieve its one and only mandate for price stability, and President Mario Draghi & Co. may continue to insulate the euro-area over the coming months as the International Monetary Fund (IMF) cuts its global growth forecast for 2019.

The trade dispute between the U.S. and China may become a growing concern for the ECB as the two region are ranked major trading partners for Germany, Europe’s largest economy, and a growing number of Governing Council officials may favor a more accommodative stance amid ‘the persistence of uncertainties related to geopolitical factors, the threat of protectionism and vulnerabilities in emerging markets.’ With that said, the ECB may have little choice but to further support the monetary union as ‘the information that has become available since the last Governing Council meeting in early March confirms slower growth momentum extending into the current year,’ but it seems as though the Governing Council will keep monetary policy on auto-pilot ahead of the second-half of the year as President Draghi’s term is set to expire at the end of October.

Until then, the ECB’s wait-and-see approach for monetary policy may keep EUR/USD afloat as the central bank insists that ‘underlying inflation is expected to increase over the medium term,’ and the euro-dollar exchange rate may continue to track the range-bound price action carried over from the previous month amid the failed attempt to test the 2019-low (1.1176). 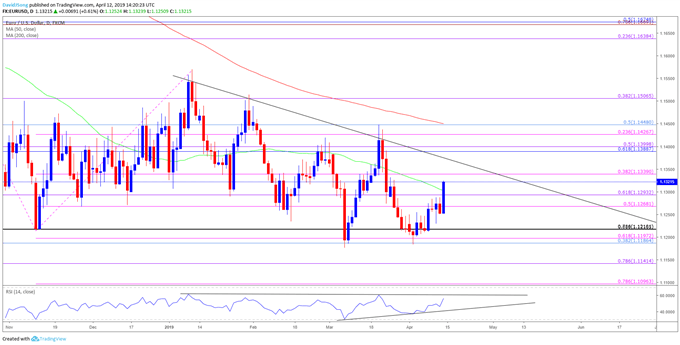 Sign up and join DailyFX Currency Analyst David Song LIVE for an opportunity to discuss key market themes along with potential trade setups.

For more in-depth analysis, check out the 2Q 2019 Forecast for EUR/USD