The near-term rebound in EUR/USD was short-lived, with the exchange rate slipping to a fresh 2019-low (1.1118) as the European Central Bank (ECB) warns that the ‘the risks surrounding the euro area growth outlook remain tilted to the downside’

The updates to the ECB’s monthly economic bulletin suggest the central bank will continue to support the euro-area as ‘the information that has become available since the Governing Council’s monetary policy meeting in March confirms slower growth momentum extending into the current year,’ and President Mario Draghi & Co. may keep the door open to implement more non-standard measures as the central bank struggles to achieve its one and only mandate for price stability. 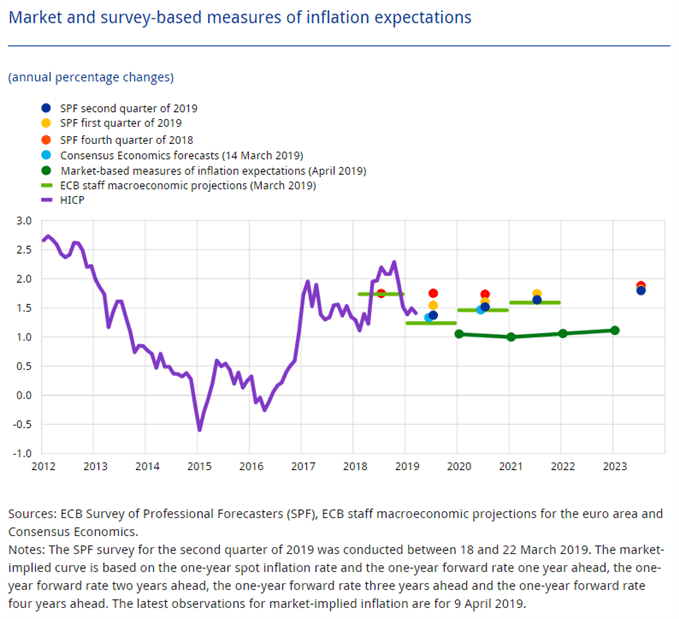 Even though the Targeted Long-Term Refinancing Operation (TLTRO) is set to launch in September, the ECB may have little choice but to endorse a dovish forward-guidance at the next meeting on June 6 as the central bank pledges to ‘to adjust all of its instruments, as appropriate, to ensure that inflation continues to move towards the Governing Council’s inflation aim in a sustained manner.’ In turn, a growing number of ECB may show a greater willingness to introduce a negative interest rate policy (NIRP) as ‘incoming data continued to be weak,’ and the Euro stands at risk of facing additional headwinds over the near-term as President Draghi & Co. remain reluctant to abandon the easing-cycle.

With that said, it remains to be seen if President Draghi & Co. will continue to endorse a wait-and-see approach ahead of the next quarterly meeting in June as ECB officials insist ‘underlying inflation is expected to increase over the medium term,’ but recent price action brings the downside targets on the radar for EUR/USD as the exchange rate snaps the opening range for 2019. At the same time, recent developments in the Relative Strength Index (RSI) indicates that the bearish momentum is gathering pace as the oscillator snaps the bullish formation carried over from March. 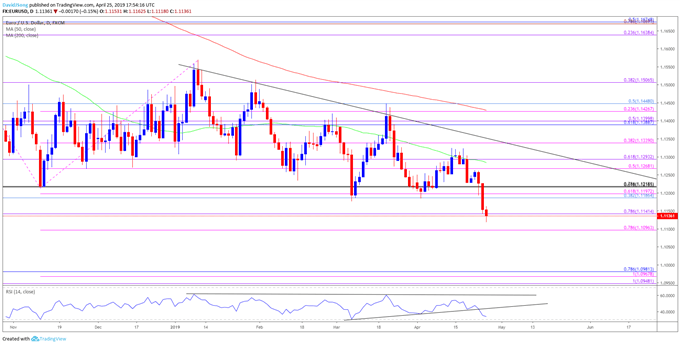 There appears to be a broader shift in EUR/USD behavior as the exchange rate threatens the wedge/triangle formation from earlier this year, with the near-term outlook mired by the failed attempt to test the 1.1340 (38.2% expansion) hurdle.At the same time, recent developments in the Relative Strength Index (RSI) offer a bearish signal as the oscillator snaps the upward trend from earlier this year.

For more in-depth analysis, check out the 2Q 2019 Forecast for the Euro