The European Central Bank (ECB) interest rate decision may fuel the recent pullback in EURUSD as the Governing Council continues to pursue its monetary easing cycle.

The ECB meeting may influence the near-term outlook for EURUSD as there appears to be a growing discussion at the central bank to implement a negative interest rate policy (NIRP) on the Main Refinance Rate, its flagship benchmark for borrowing costs.

It seems as though the Governing Council will continue to rely on its non-standard measures to insulate the Euro-area as “slower growth momentum is expected to extend into the current year,” and a dovish forward guidance for monetary policy is likely to weigh on the Euro Dollar exchange rate as it boosts speculation for a more accommodative stance.

However, the ECB may merely attempt to buy more as the central bank prepares to launch another round of Targeted Long-Term Refinance Operations (TLTRO), and a more bullish scenario may materialize for EUR/USD if President Mario Draghi and Co. stick to the same script.

As expected, the European Central Bank (ECB) stuck to the zero interest rate policy (ZIRP) in April, with the central bank largely endorsing a dovish forward guidance as “the Governing Council stands ready to adjust all of its instruments, as appropriate, to ensure that inflation continues to move towards the Governing Council’s inflation aim in a sustained manner.”

It seems as though the ECB will keep the door open to further support the monetary union as “the risks surrounding the euro area growth outlook remain tilted to the downside,” and the Governing Council may continue to push monetary policy into uncharted territory as the central bank struggles to achieve its one and only mandate for price stability.

The Euro struggled to hold its ground following the dovish comments, but the market reaction was short-lived, with EURUSD bouncing back from a low of 1.1230 to close the day at 1.1274. Learn more with the DailyFX Advanced Guide for Trading the News. 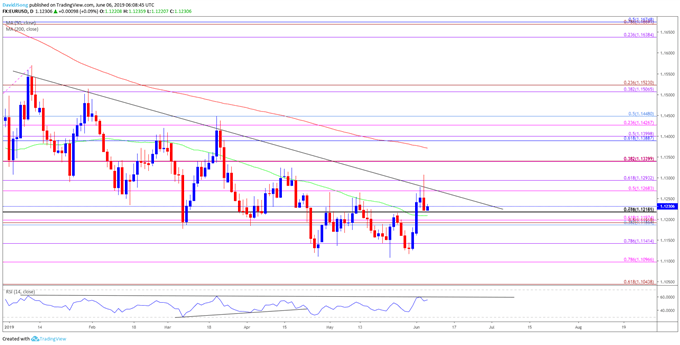