– The US Dollar has held Fibonacci support following a four-day draw-down that started after a test of a key resistance level. Last week’s NFP report assisted with the bearish move in the USD, and in-turn EURUSD has recovered the entirety of last week’s ECB-fueled losses. This sets the stage for next week’s FOMC rate decision on the calendar for Wednesday at 2PM ET.

– Also on next week’s economic calendar are rate decisions out of Switzerland and the UK, going along with inflation numbers out of Japan and Canada.

US Dollar Holds Fibonacci Support: FOMC Up Next Week

The US Dollar has held support from 96.47 level that was tested on Wednesday of this week; and while buyers haven’t exactly come back with the same strength that was seen in early-March, it does set the stage for what could be a very interesting FOMC rate decision next week. And while there are minimal expectations for any adjustments to interest rates, what the bank says about the balance sheet could have a big pull on the bond market which could, in-turn, impact the global risk trade.

Also on next week’s calendar: UK inflation is released on Wednesday morning and both the Bank of England and the Swiss National Bank host rate decisions on Thursday morning. Japanese and Canadian inflation numbers are released to close out the week, making for a rather back-loaded calendar for next week.

DailyFX Economic Calendar: High-Impact Events for the Week of March 18, 2019 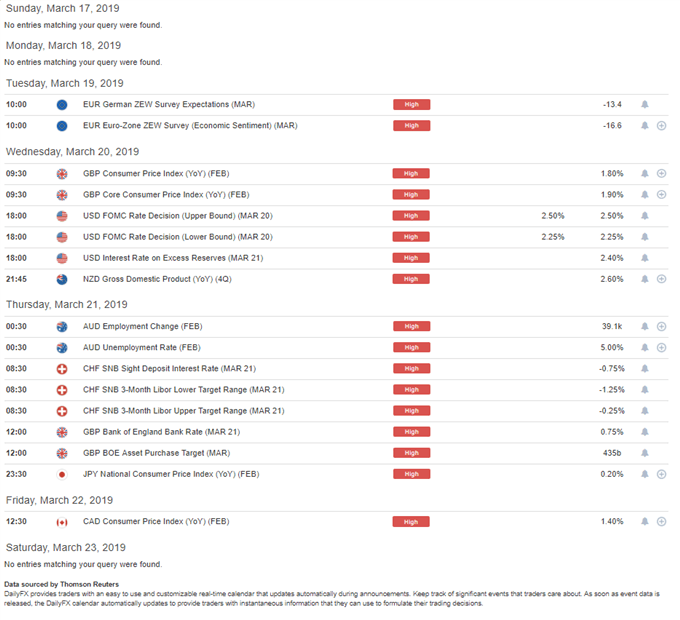 This was looked at in yesterday’s webinar as there’s a case to be made for either direction in the US Dollar. The Greenback ran into a big resistance level last Thursday at 97.71, which is the yearly high in the currency. This is the same price that turned-around bullish advances in both November and December; and when buyers tested it again last week, prices began to fall and didn’t really stop until Wednesday, when the Fibonacci support level mentioned above came into play. This theme did get an assist from last week’s NFP report, which showed an abysmal headline number along with very strong wage growth. While this appears to be a fairly clear-cut bearish response in the currency to that report, the headline number may signal a tighter labor market, particularly when taken with that wage growth; and this may compel the Fed to be a bit more hawkish than what many were initially expecting after that release.

The US Dollar has shown back-and-forth price action over the past few months, with that 97.71 level helping to hold the highs while buyers have been getting a bit more aggressive. This has led into a longer-term ascending triangle pattern, which will often be approached in a bullish manner, looking for the motivation that’s driven buyers-in at higher-lows to, eventually, take out that horizontal resistance. Might the FOMC rate decision next week be that catalyst? Or will this theme need an assist from the Euro-Zone and a down-side break in EURUSD?

On a shorter-term basis, bears have remained fairly-consistent since that resistance came into play last week. Prices have thus far held support at 96.47, but bulls have yet to take out the prior lower-high, keeping the door open for short-term bearish strategies. Deeper support potential around 96.30 and then around 96.00.

EURUSD: A Week After ECB, Not So Weak

Last week’s ECB rate decision saw the bank announce a fresh round of TLTRO’s just months after making the announcement that they were exiting stimulus. This provoked a quick and impulsive short-side move in EURUSD that brought upon a temporary breach of support in a range that had been running for four months.

But buyers showed-up just below 1.1200, with support cauterizing around the 61.8% Fibonacci retracement of the 2017-2018 bullish move in the pair. Since then, EURUSD has been on a consistent track-higher, holding a bullish trend-line as prices passed back-above the 1.1300-handle. At this stage, the pair has recovered the entirety of those ECB-fueled losses.

Similar to the US Dollar above, the longer-term setup appears markedly different, as months of back-and-forth price action may open the door to bigger-picture breakdown potential. A bearish trend-line connecting the September and January swing-highs sits atop price action, and this can keep interest on short-side potential in the pair; and a breach of support can open the door to down-side targets at 1.1000 and a zone around 1.0850.