The Euro regained some strength against the Dollar in the morning session as the EURUSD managed to break the 1.1140 resistance line it had encountered in previous sessions. The pair had been trading in a tight range of 7 pips in the Asian session trying to recover from the two-year lows of 1.1107 seen last Thursday (May 23). The push higher in the Euro has also coincided with cross-related buying EURGBP.

However, a lower than expected reading on German CPI can halt the Euro’s rebound as it would likely further embolden the dovish stance from the ECB next week. Inflation for the month of May is expected to come in at 1.6%, lower than last month’s 2%, as it is expected for inflation to slow down after the month in which Easter takes place on the back of the Easter seasonality. German states have been releasing their CPI figures for May throughout the morning before the National figure is released at 1200 GMT.

We could see the Dollar bulls regain some control throughout the day as continuing trade wars could see demand for the safe-haven dollar push the EURUSD lower. Focus will also shift towards US core inflation being released later today, as investor’s keep an eye out for signals that an increase in prices could lead to the Fed maintaining its patient stance.

Bond markets are sending a signal

German 10-year bond yields are down to post-Brexit lows of -0.20% as slowing inflation expectations and stagnant growth prompt fears of a recessionary environment. And it is not just in the Eurozone where investors are worried, long-term yields have been falling around the world with some government bonds hitting their lowest levels in years. 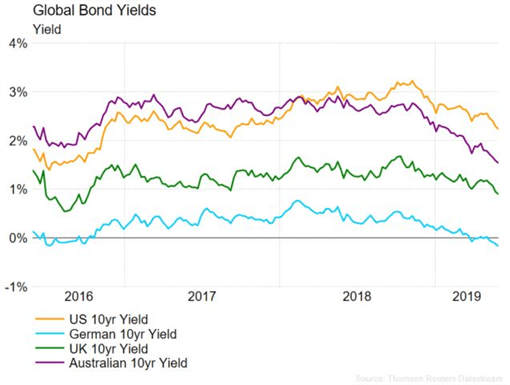 When investors are concerned about the economy and equity markets they turn to government bonds because of their implied low risk. The purchase of bonds pushes bond prices higher which in turn leads to a fall in yields, the payment investors collect from their investment in bonds. Thus, falling bond yields can be seen as an indicator that a recessionary environment is coming, if not at least that investors’ concerns about the economic outlook are growing.

Of a bigger concern is that the increase in demand for longer-term bonds has pushed longer-term yields below shorter-term yields. The current yield on a 10-year yield Treasury note yields stands at 2.16% whilst a 3-year yield Treasury note currently yields 2.37%. This is known as a yield curve inversion and is of a big concern to investors as they have preceded recessions in the past. In stable market conditions, investors would demand a higher yield on longer-term bonds as they seek for greater compensation for having their money tied up for longer periods of time. 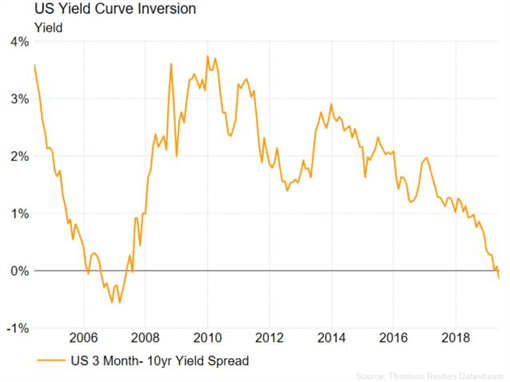 Worsening economic conditions and continuing trade wars between China and the US have dampened the economic outlook of the economy and markets are now signalling that they expect at least two rate cuts by the beginning of next year, despite the Fed announcing last week that they wish to keep rates unchanged for the foreseeable future. The next FOMC meeting is due to take place on June 18-19, and despite markets not pricing in a rate cut in June, they expect the funds rate to be cut in September.

Across the pond, the ECB is expected to meet next Thursday June 6, with recent remarks from ECB Board member Olli Rehn suggesting a continued dovish stance on monetary policy. Inflation in the Eurozone is expected to miss its 2% target for the next two years as forecasts show 1.3% for 2019, 1.5% for 2020 and 1.6% for 2021. A recent survey of 100 economists carried out by Reuters revealed that the ECB has no prospects of increasing interest rates throughout 2020. It comes on the back of ECB officials signalling that the Central Bank is willing to keep interest rates negative for as long as needed to ensure that the Eurozone economy avoids a recession. Current rates remain at -0.40%.