EUR: The Euro spiked higher, alongside the DAX following reports that Trump is said to be planning to delay imposing auto tariffs for up to 6-months. (full story) As a reminder, President Trump had to make a decision by May 18th on whether he would go ahead with placing tariffs on EU auto imports. In reaction, EURUSD reclaimed the 1.12 handle, while DAX surged 1.75% to break above the 12000 level.

GBP: The Pound is the notable underperformer yet again, which current trades at the lowest level since February 15th against the USD. As talks between the government and Labour continue, the Labour spokesman once again poured cold water on the hopes of a Brexit breakthrough, thus weighing on the Pound, which in turn raises the likelihood that PM May’s 4th attempt of getting the withdrawal agreement passed will fail. (full story)

JPY: Investors continue to flock towards safer assets, one of which has been the Japanese Yen and Swiss Franc, which outperform its major counterparts. While the trade war tensions between the US and China keep investors on the defensive, weak data from China and the US also provides a fresh reminder that global growth is indeed slowing down.

CAD: USDCAD saw a relatively muted reaction to the latest inflation data, moving a marginal 15pips higher on the release before retracing the initial uptick. Headline CPI had printed in-line with expectations, however, the preferred measure of the BoC (average of trim, median and common) dipped slightly to 1.9% from 2%. As such, this is unlikely to shift the Bank of Canada from its neutral stance. (CAD Technical analysis) 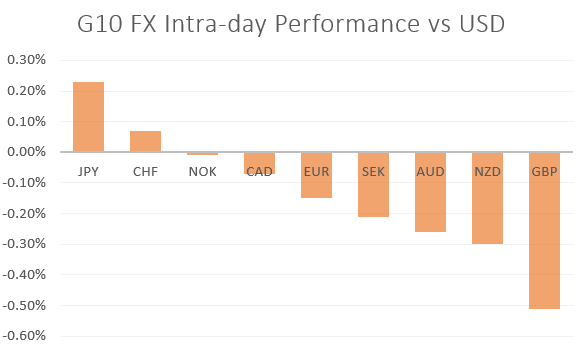