Today will see the latest NFP report for March, whereby analysts are forecasting a figure of 180k. It is also likely that last month’s surprising low figure of 20k will be revised higher. Keep in mind that while last month’s reading had been soft, the 3-month average is at a robust 186k, suggesting that the labour market remains strong. Alongside this, the unemployment rate is expected to hover around multi-decade lows of 3.8%, while the wage growth figures are seen sticking around the highest level in 10yrs. However, given that the Fed have effectively called the end of the current rate hike cycle, the NFP data has lost its allure with currency implied volatility at subdued levels. 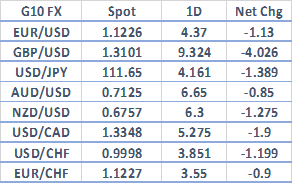 EURUSD: Ahead of the NFP data, vols have dropped off across the board with EURUSD 1D vols dipping 1.13 vols to 4.37, which in turn implies a relatively subdued move of 38pips.

USDJPY: Implied volatility in USDJPY fell 1.39 vols to 4.16, consequently implying a risk premium of 34pips. Alongside this, investors have paired back expectations of further losses in USDJPY as premium for USDJPY puts ease slightly.

GBPUSD: Unsurprisingly, GBPUSD implied volatility is the highest in the G10 space with an implied move of 88pips. However, much of the risk premium is due to the focus on Brexit as opposed to the NFP data. 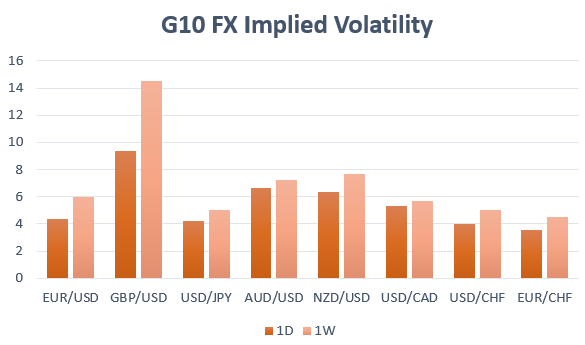