Fundamentally, bank stocks find themselves in a peculiar position as the tailwind of potential rate hikes has been effectively removed, while the prospect of higher volume lending looks to counteract the smaller margins in a low interest rate environment. For JPM, WFC and PNC, recent earnings have been relatively scattered as each faces their own unique challenges. 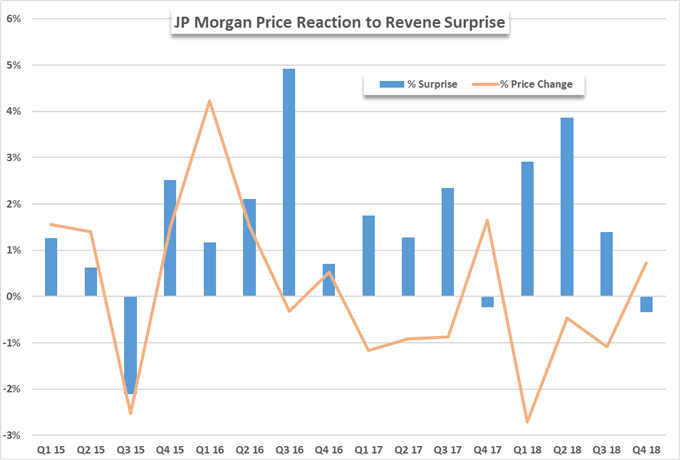 JP Morgan has a stellar earnings track record over the past few years from a revenue perspective, rarely missing forecasts. Still, traders may have caught on to the consistent outperformance and raised their own expectations in response. With loftier goals, price reaction has been negative in all six recent revenue beats.

Conversely, a small miss last quarter was met with a positive price reaction – potentially indicative of a positive outlook for the quarter to come. Ahead of Friday’s report, implied volatility for JP Morgan’s stock is 2.7% – compared to a 0.19% average price reaction – which would leave the resulting stock price somewhere between $102.50 and $108.20. Revenue guidance for the first quarter is $28.07 billion alongside $2.32 in earnings per share. 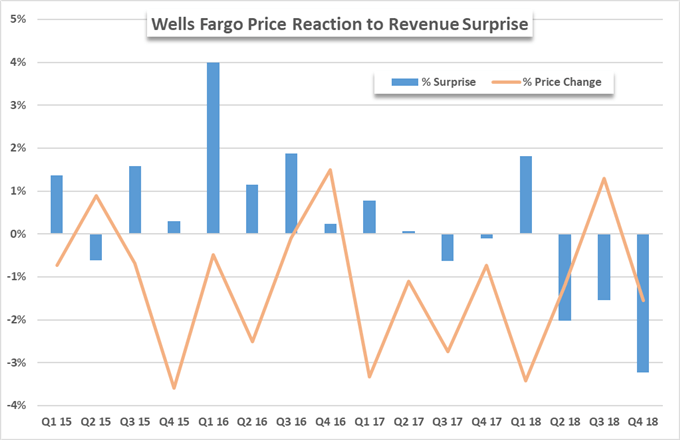 Unlike JP Morgan, Wells Fargo has missed on revenue guidance in three of its last four quarters. The bank has been mired in regulatory scrutiny and client scandals which it has spent considerable cash on to resolve. Over the last four years, WFC has had greater price volatility after a release compared to its peers JPM and PNC resulting in an average -1.16% price reaction. With that in mind, it is unsurprising it has the highest implied volatility of the three heading into Friday’s open at 3.5%. First quarter guidance is $1.08 EPS on $20.87 billion in revenue. 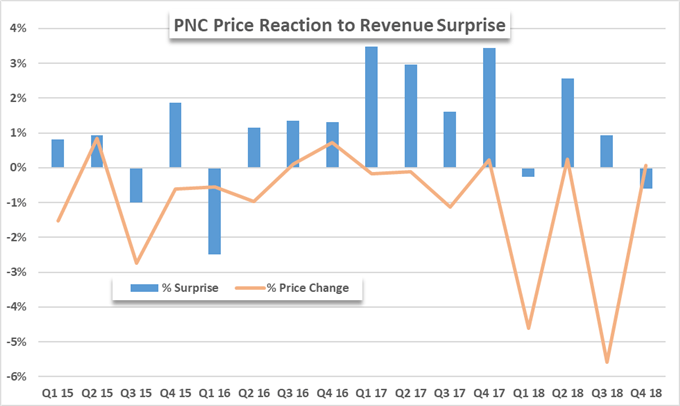 Like JP Morgan, PNC has proved its ability to consistently outperform revenue forecasts – but has resulted in few positive price reactions. In fact, the average price reaction during the above timeframe is -0.99% – notably lower than the 0.19% for JPM. Of the three banks reporting tomorrow, PNC has the second highest implied volatility at 2.9%, which would see the stock price fall between $123.5 and $131. PNC analysts have forecasted $2.59 EPS on $4.25 billion in revenue.

After the first round of bank earnings, next week will see a flurry of firms follow suit. Citigroup and Goldman Sachs are due to report Monday before market open, followed by Bank of America, Blackrock, United Health Group and Johnson & Johnson on Tuesday. Follow @PeterHanksFX on Twitter for equity insight and earnings season updates.