– The February UK Industrial Production Manufacturing Production, and GDP are due on Wednesday at 08:30 GMT.

– Consensus forecasts expected UK industrial and manufacturing production to have contracted in February, and for GDP to come in flat.

– Retail traders have started buying the Canadian Dollar, with USDCAD net-shorts having risen in recent days.

Tensions over Brexit have increased in recent weeks, and the fact that the UK government has blown past the original March 29 deadline has led to an increased level of uncertainty impacting business, consumer, and economic confidence.

With confidence turning lower in Q1’19 on the back of Brexit, there’s little surprise that real economic data is starting to show signs of duress. According to Bloomberg News, the trio of UK data releases on Wednesday morning should underscore the deteriorating economic environment. 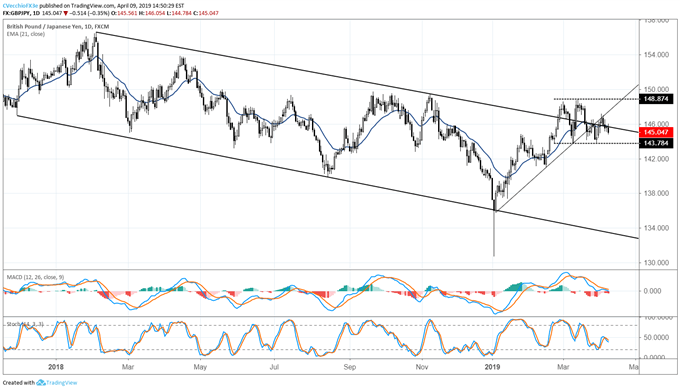 Despite volatility in the GBP-crosses remaining elevated, particularly in contrast to other major currency crosses, there hasn’t been much progress made by any GBP-cross over the past several weeks; GBPJPY is no different. Since February 22, GBPJPY prices have traded in a range between 143.78 and 148.87.

Accordingly, to avoid the latest Brexit news from interfering with any decision making, traders may find that bulls will have an easier time more than 148.87 while bears may take control below 143.78. It should be noted that GBPJPY has failed to retake the uptrend from the post-Yen flash crash closing low. 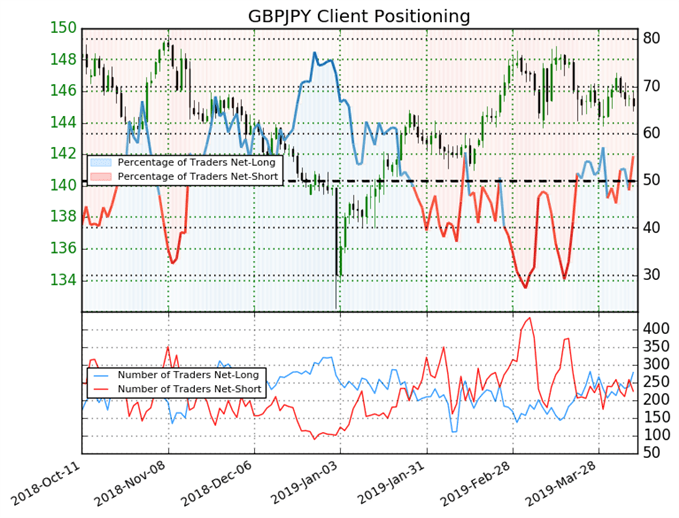 We typically take a contrarian view to crowd sentiment, and the fact traders are net-long suggests GBPJPY prices may continue to fall. Traders are further net-long than yesterday and last week, and the combination of current sentiment and recent changes gives us a stronger GBPJPY-bearish contrarian trading bias.