– After Fed Chair Powell’s press conference, a pullback inFederal Reserve rate cut expectationshelped spur a reversal in the US Dollar.

– Even though the Bank of England produced a new Quarterly Inflation Report (QIR) at its May meeting, policy remained and will remain on hold until Brexit is resolved.

– Retreating Fed funds cut odds for 2019, particularly if they feed into higher US Treasury yields, will help the US Dollar and hurt gold prices.

The Federal Reserve’s and Bank of England’s May policy meetings could not have produced more divergent results for their local currencies. The US Dollar saw considerable volatility on May 1 after Fed Chair Jerome Powell said that low inflation was “transitory” and not “persistent,” taken as a sign that the likelihood of the Fed lower rates this year is smaller than otherwise anticipated. The British Pound can’t say it experienced anything meaningful after the May BOE meeting.

The BOE’s May meeting brought about a new Quarterly Inflation Report (QIR), the Monetary Policy Committee’s equivalent to the Fed’s Summary of Economic Projections (SEP). While the QIR release would constitute a significant event in any given month, recently, and for the foreseeable future, the QIR has been a non-event.

The fact of the matter is that in an effort to appear apolitical, the BOE will stay on the sidelines of the UK economy until the Brexit talks are resolved. Look no further than the bland reaction in GBPUSD around the BOE meeting today for confirmation that this is a lifeless market without Brexit headlines: a neutral doji candle formed during the hour around the QIR release.

Fed Funds No Longer Confident About a Rate Cut

Rates markets have been more active in recent days, slowly pricing out the likelihood of a Fed rate cut in 2019; much of this was spurred on in the past 24-hours. At their apex at the end of March, markets were pricing in a 58% chance of a 25-bps rate cut in September; now, odds of a September cut are only 32%.

The probability of a rate cut in 2019 has been diminished meaningfully over the past week. Ahead of the May Fed meeting, there was a 68% chance of a 25-bps rate cut by the end of the year; now those odds have fallen down to 52%. A continued retracement in Fed cut expectations for 2019 will serve to benefit the US Dollar, just as it did during Fed Chair Powell’s press conference on May 1.

We can measure whether or not a rate cut is being priced-in for 2020 by examining the difference in borrowing costs for commercial banks over a one-year time horizon in the future. Over the past two weeks, rate expectations have been slowly pricing out a cut, with rates markets discounting -24-bps by the end of 2020; this is a 4-bps increase from this time last week. 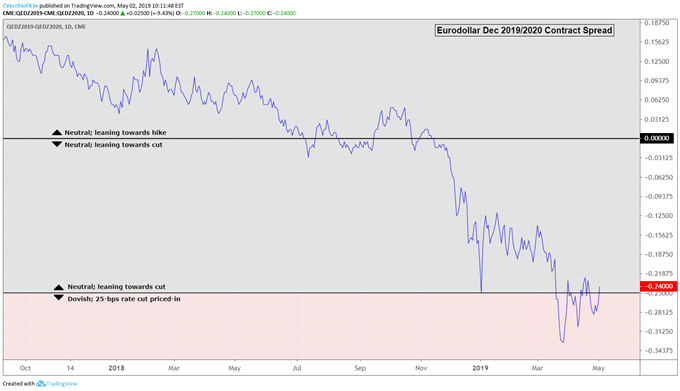 Readings have oscillated around one cut being priced-in for most of April. Receding 2020 rate cut expectations have provided the spark that the US Dollar has needed to retain its bullish breakout attempt following a six-month consolidation dating back to November 2018. 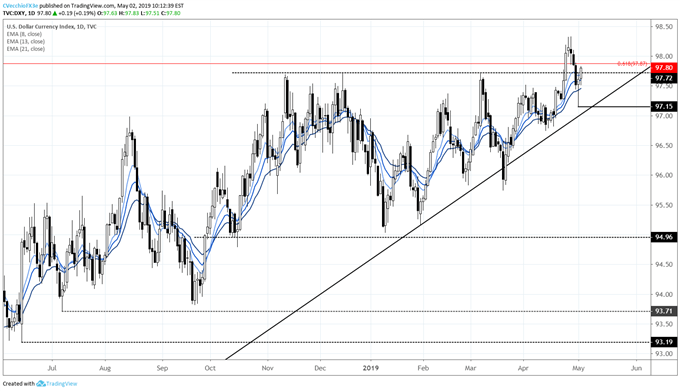 After the May Fed meeting, the US Dollar’s (via the DXY Index) bullish daily hammer reestablished price above the daily 8-, 13-, and 21-EMA envelope. While it initially appeared that the US Dollar’s breakout attempt after a six-month consolidation may have been a failure – price fell back below former resistance at 97.72 – we must conclude that it is too soon to write-off a bullish outcome. Indeed, the DXY Index is back above 97.72 at the time of writing.

Consider the fact that prior to the May Fed meeting, rates markets were pricing in a 68% chance of a 25-bps rate cut by the end of 2019; after Fed Chair Powell’s press conference, there is only a 52% chance. A further retrenchment in rate cut expectations should prove supportive for the US Dollar and disruptive for gold prices.