– According to Bloomberg News, consensus forecasts are calling for US growth to have settled at a 2.4% annualized rate; however, growth expectations for Q2’18 are below 1%.

Growth expectations for the final Q4’18 US GDP have been tempered thanks to the shutdown. The US Congressional Budget Office estimated that the economy lost at least -0.1% of GDP last quarter and -0.2% in Q1’19 as a result of the shutdown. The NYFed Nowcasting estimate sees growth due in at a more modest 2.6% annualized. Meanwhile, the consensus forecast, according to Bloomberg News, calls for headline growth in at 2.4%. 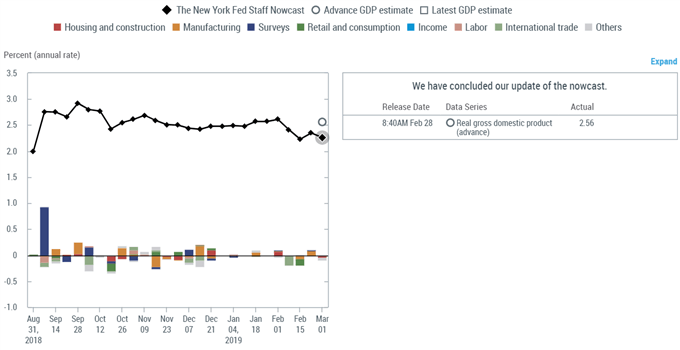 The future doesn’t appear any brighter. The increasingly difficult global macro environment due to the US-led trade wars as well as the fading effect of the Trump tax plan on the domestic macro environment, expectations are for the US economy to continue to see slower rates of growth for the foreseeable future. The NYFed Nowcasting estimate for Q1’19 shows growth at 1.29% while the Atlanta Fed GDPNow estimate is at 1.2%. 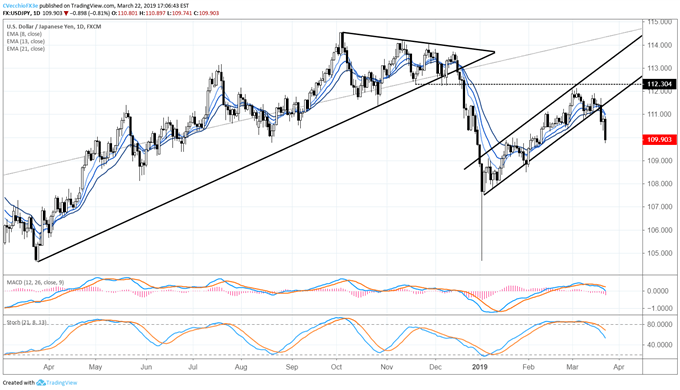 The rally by USDJPY since the Yen flash-crash at the start of 2019 may be finished. With the bearish outside engulfing bar developing on March 20, the uptrend from the post-flash crash low was breached. Price action since Wednesday has been showing signs of significant follow through to the downside. Having cleared out the early-March swing low at 110.75, the probability of more downside in the near-term has increased.

To this end, USDJPY price is now below the daily 8-, 13-, and 21-EMA envelope while both daily MACD and Slow Stochastics are trending lower, having fallen out of overbought conditions. A near-term bearish bias may be appropriate unless the March 20 bearish outside engulfing bar high of 111.69 is breached. 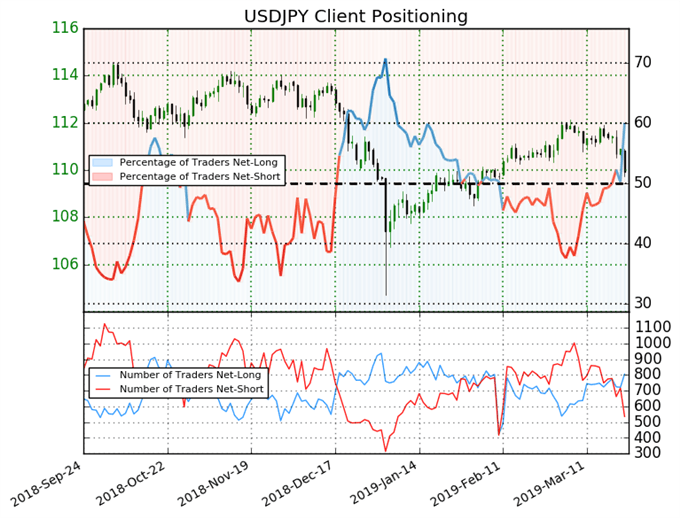 We typically take a contrarian view to crowd sentiment, and the fact traders are net-long suggests USDJPY prices may continue to fall. Traders are further net-long than yesterday and last week, and the combination of current sentiment and recent changes gives us a stronger USDJPY-bearish contrarian trading bias.