The Elliott wave pattern for NZD/USD implies a bullish bias while prices hold above the March 7 low of .6744. There is enough evidence to consider the three-month long Elliott wave triangle pattern complete. This is a bullish triangle with initial wave projections of .7090 and .7298.

What is the current Elliott wave for NZDUSD?

We have been keeping a decent pulse on the NZDUSD pattern since November as that particular impulse wave appeared unfinished. In early January, the partial set back was nearing an end setting the stage for a rally. The smaller Elliott wave patterns in January made it troublesome for near term bulls and the sideways grind led to a triangle pattern taking shape.

Triangle patterns appear in only certain places of the Elliott wave sequence. Therefore, if this analysis holds, then the triangle is in the ‘B’ position of a bullish A-B-C zigzag pattern. We know from our Elliott wave studies that wave ‘C’ of a zigzag must subdivide in five waves taking the shape as an impulse wave or diagonal pattern.

The March 12 high appears to be the first of these five waves. The current setback is best counted as the second wave. Therefore, the current Elliott wave appears to be wave ii of C.

As wave ‘i’ appears to have an extended fifth wave in it, a retracement back to near .6800 would be normal. 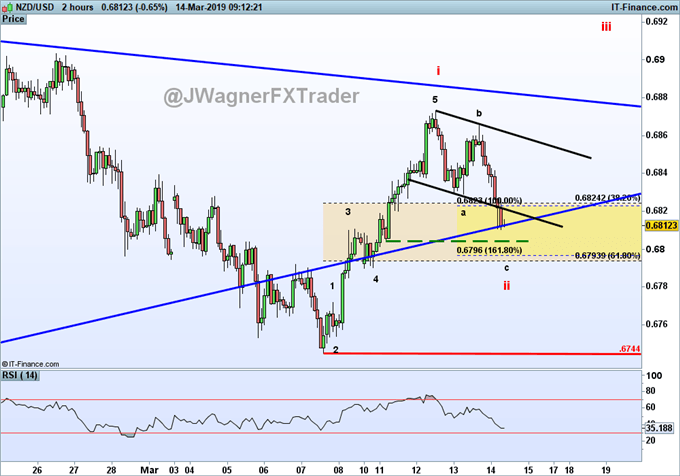 So long as NZDUSD holds above .6744, the Elliott wave pattern is bullish in anticipation of a multi-hundred pip move. Wave relationships appear near .7090 and .7298 with potentially higher levels available.

USD/ZAR Has Biggest Monthly Gain Since August – More to Come?