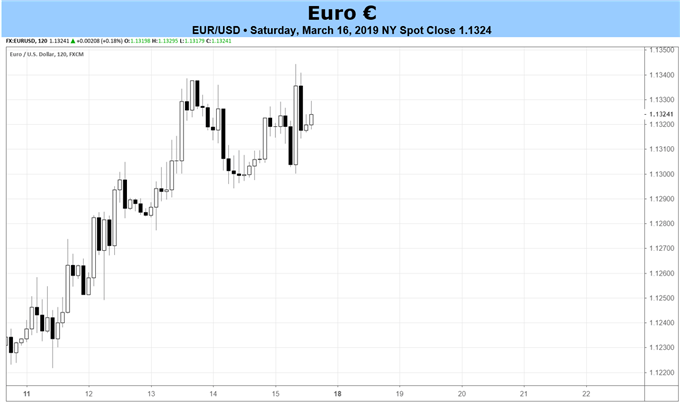 – The highest rated Euro-centric data due out this week are the ZEW surveys on Tuesday, although the March PMIs due out on Friday are likely to generate the greatest market reaction among the EUR-crosses.

– Improving European economic data may help spark a short covering rally in the EUR-crosses; per the CFTC’s COT report, speculative short positions are coming off of their highest level in three years.

– The IG Client Sentiment Indexshows that retail traders are selling EURUSD rallies – a contrarian signal that more gains may be yet to come.

Despite enduring significant losses at the start of the month around the March European Central Bank policy meeting, the Euro has been on a bit of a tear the past week-plus. As the calendar turned into the ides of March, only EURGBP posted a negative performance over the week, closing down by -1.29% as the latest Brexit developments pointed to a potential delay in the process beyond the original March 29 deadline.

An objective look at European economic data shows that conditions have continued to improve, relatively speaking, over the past few weeks. In recent days we’ve seen January German trade data and January Eurozone Industrial Production figures come in better than economists’ forecasts. As a result, heading into the coming week, the Citi Economic Surprise Index for the Eurozone has moved up to -34.1 from -49.5 one week earlier, up further from -79.7 on February 15. 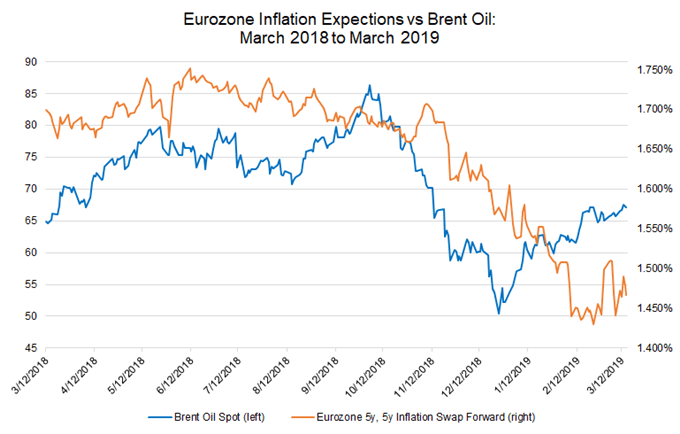 Stability in the conditions around inflation may be helping support the Euro’s recent rebound. ECB President Mario Draghi’s preferred measure of inflation, the 5-year, 5-year inflation swap forwards, closed last week at 1.466%, slightly higher from where it was one month earlier at 1.438. The ongoing rebound in energy prices seems to be helping, with Brent Oil prices up by +1.4% since February 15.

‘Barbell’ Economic Calendar in Week Ahead for Euro

The Eurozone economic calendar for the coming week is shaped kind of like a barbell: traders will want to pay attention to data due out on Tuesday and on Friday, with little practical need to pay attention to any release in between. The March Eurozone and German ZEW Surveys on Tuesday may help shine some light on how institutional investors feel about the recent turn in economic data, particularly after the ECB’s announcement for another TLTRO program. On Friday, the preliminary March Eurozone PMI reports, on balance, are expected to show signs of a modest uptick in growth conditions (Composite due in at 52 from 51.9).

EURGBP to Stay at Center of Attention

The middle of the week will be defined by what’s happening in the secondary pair in EUR-crosses. EURGBP will be of particular interest, given the UK inflation report for February due out on Wednesday and the March Bank of England meeting on Thursday.

Middle of Week Sees Fed Meeting (Among Others)

Beyond the two major EUR-crosses, traders will want to have EURAUD on their radar on Thursday when the February Australian jobs report is released, especially as rates markets shift pricing around the next expected Reserve Bank of Australia move (according to overnight index swaps, 54% chance of a 25-bps rate cut before August). 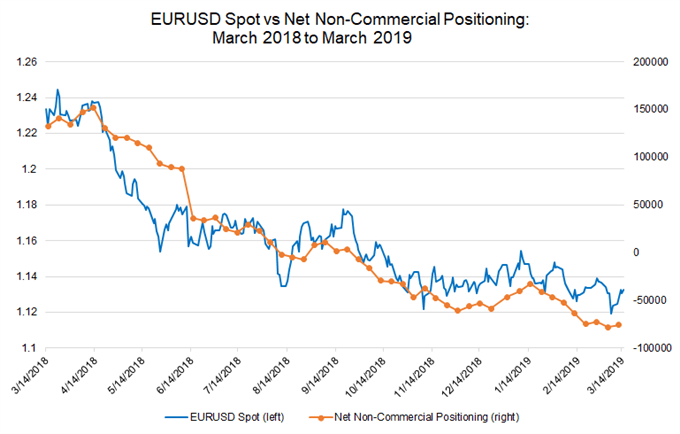 Finally, looking at positioning, according to the CFTC’s COT for the week ended March 12, speculators decreased their net-short Euro positions to 75.6K contracts, down from the 78.2K net-short contracts held in the week prior. It’s worth noting that we’ve recent come off of a three-year high in net-shorts. Given the current backdrop, one can’t dismiss the possibility of a short covering rally in the coming weeks.