Overnight, the RBA kept its cash rate at 1.50% with the accompanying statement largely in line with the prior months. The central bank highlighted that the Australian labour market remains strong, while also continuing to expect that growth for 2019 is to hover around 3%, however, the RBA did continue to highlight concerns over household consumption and the uncertainty that US-China trade wars provide. In reaction, the AUD was relatively unmoved with the RBA providing little in the way of new policy signals. Going forward, the focus for AUD watchers will be on tonight’s speech by RBA Governor Lowe and Q4 GDP report.

Australian GDP Tilted to the Downside

Given the recent run of data in the lead to Q4 GDP figures, risks are tilted to the downside. As it stands, the RBA forecasts household consumption at 0.6%, however, with the Q4 retail sales volume hitting 0.1%, the central bank could be somewhat disappointed. As a reminder, consumption makes up around 60% of GDP. Alongside this, yesterday’s Q4 inventories data posted surprise decline, while corporate profits saw a sizeable miss at 0.8% (Exp. 3%). Consequently, Aussie GDP may disappoint expectations of 0.3%, which may be enough to provide fresh dovish signals from the RBA in the near-term.

Amid the domestic risks to the Australian economy, markets continue to see a rate cut as the most likely move with a 25bps cut near enough fully priced in by the year-end. As such, for a rate cut to become a near-term risk, a pick-up in the unemployment rate, alongside weak GDP and the continued decline in house prices would be needed. 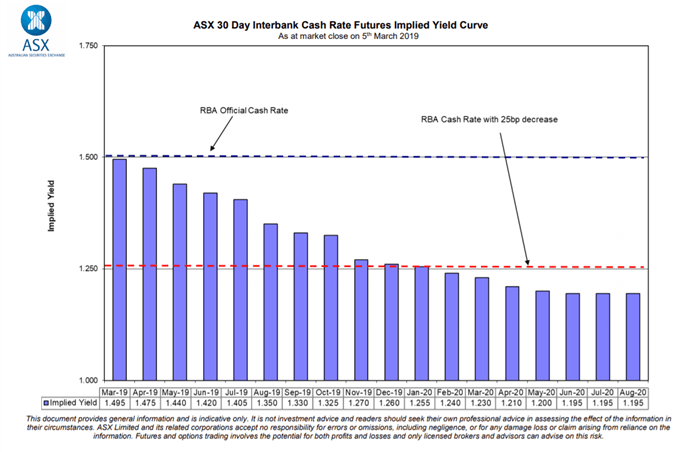