Asia Pacific markets could be characterized by partial retracement, even though most benchmark indexes pointed to a loss on Tuesday. For the Nikkei 225, the day began with a downside gap amidst rising concerns over an escalation in US-China trade wars which have recently taken a turn for the worst. It was particularly weighed down by communication services, with SoftBank Group Corp. shares down over 4.5%.

However, most regional bourses, after gapping lower, traded to the upside in the ensuing hours. It just wasn’t enough to entirely close their gaps. A dose of optimism could be traced to recent commentary from US President Donald Trump. Early into the session, he expressed optimism that a deal with China could be reached and we may know about it in 3-4 weeks.

S&P 500 futures are now pointing higher, suggesting that European and US markets may be heading for a pause in their recent declines. German and Eurozone sentiment data will be closely watched by the Euro Stoxx 50. Recently, European economics news flow has been tending to improve relative to economists’ expectations. A rosy outcome may further cool the anxiety in traders.

The FTSE 100 has just recently broken under a key support level around 7227, continuing its downtrend from the middle of April. This also follows the descent through the rising trend line from the beginning of this year. With that in mind, we may be aiming for near-term support in the medium-term which is a range between 7041 and 7071. This is also further supported by a bearish-contrarian FTSE 100 trading bias.

Want to learn more about how sentiment readings may drive the FTSE 100 and various other equities? Tune in each week for live sessions as I cover how sentiment can be used to identify prevailing market trends! 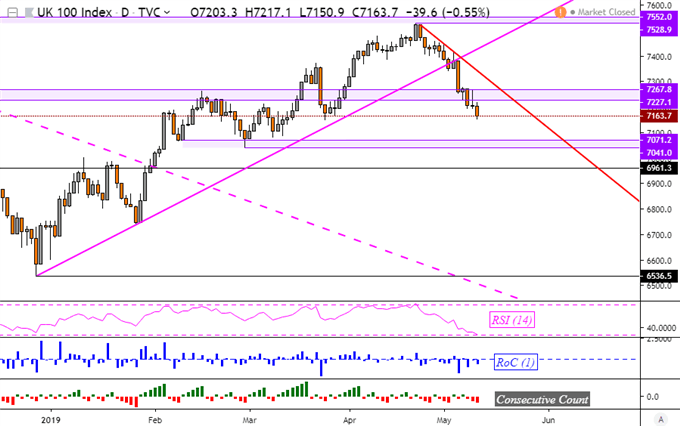