GBP, Corbyn and Brexit: an analysis:

The British Pound will likely continue to shrug off a shortening of the odds on UK opposition Labour Party leader Jeremy Corbyn becoming the next UK Prime Minister despite the markets’ traditional preference for Theresa May’s ruling Conservatives.

Those shorter odds may reflect May’s decision to reach out to Corbyn in the hope of breaking the deadlock in the UK government and parliament over Brexit. Her move has improved confidence that the UK will not leave the EU without a deal, and that has helped Sterling.

However, betting companies seem to have decided that cross-party negotiations make a Corbyn premiership more likely and that might have been expected to offset the positive impact on the Pound of May’s attempt to reach across the floor of the House of Commons.

According to the website oddschecker.com, the odds on Corbyn as the next UK PM have shortened to 5-1 at many of the bookies, roughly equal to former Foreign Secretary Boris Johnson and Michael Gove, the Environment Secretary. They are now the favorites, ahead of, Dominic Raab, a former Brexit Secretary who resigned from the government late last year and is now quoted at around 9-1 and Jeremy Hunt, the current Foreign Secretary, whose odds have drifted out to around 10-1.

This all backs up the conclusions of a Twitter poll we conducted in February to find out which of the likely successors to May would be most positive for GBP. Corbyn came in second out of four, again suggesting that the financial markets are not afraid of Labour even though Corbyn is on the left of the party.

While Sterling has been highly volatile since the British voted to exit the EU in June 2016, it is noteworthy that since it reached a low of 1.18 in October that year it has since risen to above 1.31. 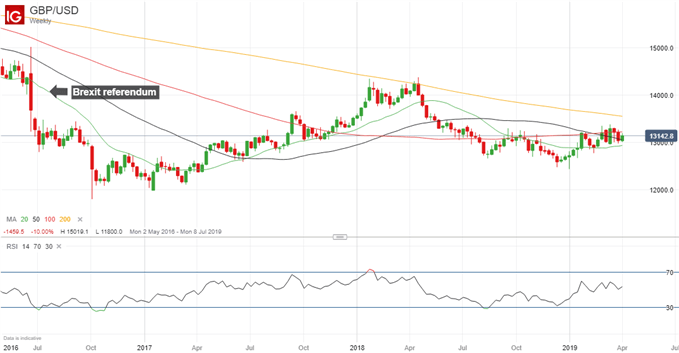 No General Election is expected for now but if one is called and Labour leads in the polls, this analysis suggests that traders long of the Pound should think carefully before reversing their positions. In the meantime, you might find this educational article useful: Using News and Events to Trade Forex

Other resources to help you trade the forex markets: