GBP: The Pound is the notable underperformer this morning with the currency taking a knock after UK government noted that the meeting between Attorney General Cox and EU’s Barnier was unlikely to result in a breakthrough. Consequently, this had exacerbated the pullback from the 1.32 handle with investors also taking profits. Elsewhere, UK Services PMI surprised to the upside, however, IHS Markit continued to note that growth in Q1 had flatlined.

AUD: Modest losses for the Aussie with investors now looking ahead towards RBA Lowe and Q4 GDP data. Overnight, the RBA left the cash rate unchanged at 1.5%, while the statement had be largely unchanged. Upside in AUDUSD likely to be capped by the sizeable option expiry at 0.7150, while support at 0.7050 continues to hold for. Given that risks are tilted to the downside for tonight’s GDP report, a miss on forecasts could see near-term support taken out.

EUR: Better than expected Eurozone PMI figures failed to brighten the fortunes for the Euro with many participants gearing up for Thursday’s ECB meeting, in which the central bank is expected to downgrade growth and inflation forecasts and may signal need for further stimulus measures. Subsequently, EURUSD remains on the backfoot.

CAD: The Loonie is trading at a 5-week low against the greenback with USDCAD back towards the top of its recent range. After reports that another minister had resigned from PM Trudeau’s cabinet, political uncertainty is beginning to weigh on the CAD. Alongside this, tensions between Canada and China are beginning to increase following China’s decision to block canola shipments from Canada’s Richardson. A closing break above 1.3175 sees a move towards 1.34. 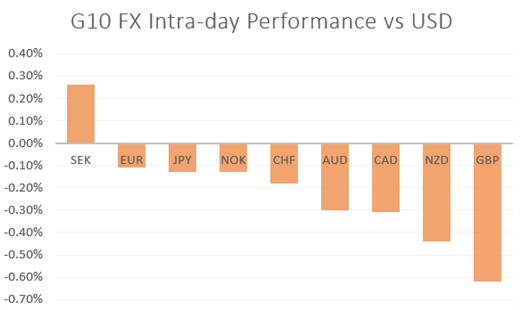