The British Pound, which is expected to be the most active major, is off to a strong start in early Tuesday trade having just underperformed over the past 24 hours. A lot of what’s been keeping Sterling under pressure is the ongoing Brexit saga. Earlier in the day, UK Prime Minister Theresa May noted that she didn’t quite yet have the support to take her divorce deal back to Parliament for a third round.

GBP/USD then rose as the House of Commons passed a vote by 329 to 302 to seize control from Ms May over the Brexit process. It is forcing votes for alternatives to a Brexit deal which includes options such as avoiding it altogether or a second referendum. Last week, the EU agreed to allow only a brief Brexit extension until April 12 should May’s deal fail to pass in Parliament this week.

Taking a broader look at GBP/USD, the pair has largely been oscillating between a range of support (1.2952 – 1.3012) and a range of resistance (1.3301 – 1.3363) since late February. The dominant uptrend from December remains intact though, held together by a rising trend line from the end of last year. A near-term descending resistance line does appear to be guiding the pair lower towards 1.3012. 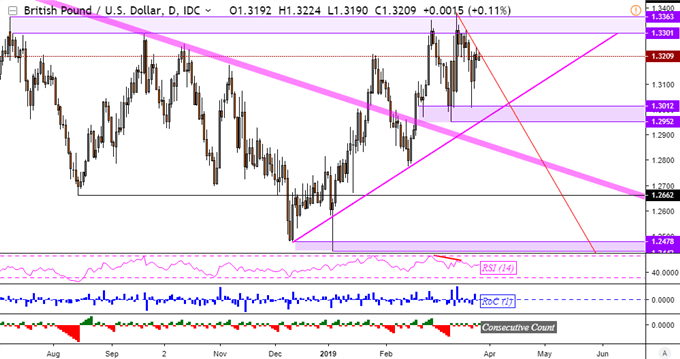 The anti-risk Japanese Yen is aiming narrowly lower against its major counterparts ahead of Tokyo stock exchange market open amidst the latest Brexit headlines. But, it is unclear at this point if market mood can significantly improve after Wall Street narrowly closed lower on Monday following increasing concerns about a recession on the horizon.

Tuesday’s Asia Pacific trading session lacks critical economic event risk, placing the emphasis on sentiment. US government bond yields continued tumbling in the prior session, likely reflecting a flight to safety as anti-fiat gold prices gained. As such, continued deterioration in market mood may once again offer a lift for the Japanese Yen.