The British Pound extended its decline against its major counterparts, with the Bank of England rate decision passing without any major fireworks. Sterling’s focus continues to be on the ongoing Brexit news after UK Prime Minister Theresa May was unable to pass her revised divorce deal through Parliament last week. Its weakness occurred mostly during earlier in the day as markets awaited the next steps in the saga.

As markets transitioned into Friday’s session, the European Union agreed to allow Brexit to be delayed until May 22 if the Prime Minister is able to get her divorce deal through Parliament next week. Otherwise, there will be an unconditional extension until April 12 in which there could be a larger risk for a ‘no-deal’ Brexit. As a reminder, last week the House of Commons voted to reject a ‘no-deal’ in any circumstances.

While GBP/USD has fallen in recent days, the dominant uptrend from December still holds. This is because the rising support line from the end of last year is guiding it higher and we have yet to test it. Sill, after resistance held at 1.3363, the pair is aiming lower and it may not be too long until that trend line is tested. Until then, losses may be a risk in the short-term. 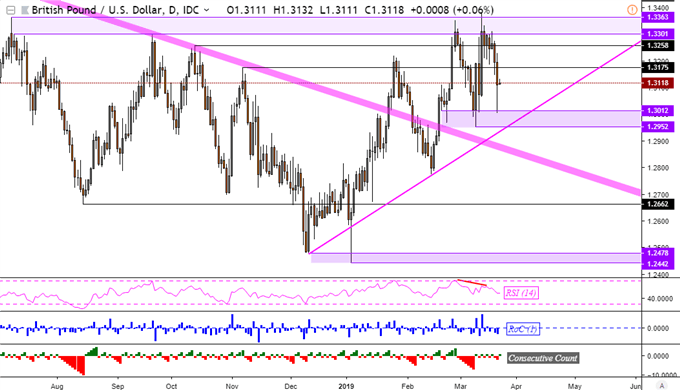 Pronounced weakness in Sterling boded well for the US Dollar, which continued recovering in the aftermath of the relatively dovish Fed rate decision. This was also the case for Wall Street, the S&P 500 rose over 1 percent as demand for safe-havens faded. Indeed, US government bond prices generally declined across the board.

The anti-risk Japanese Yen will likely look past February’s round of local inflation data as it has limited implications for near-term BoJ monetary policy expectations. Rather, the focus will likely be on sentiment. Asia Pacific stocks may echo the gains on Wall Street, sending the Nikkei 225 higher. This is what could more likely stir volatility in JPY, potentially weakening it as market mood improves. 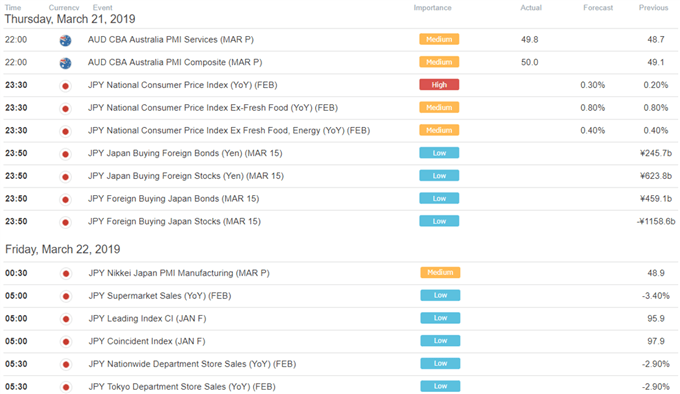