The British Pound wobbled, underperforming against its major counterparts after upside support from a ‘no-deal’ Brexit being rejected faded. GBP/USD aimed lower after technical cues warned of a turn lower in the near-term. Sterling struggled after the UK Parliament voted to delay the Brexit deadline. The nation will have to justify its request to do so, requiring unanimous agreement from the other 27 EU member states.

The US Dollar appreciated at the expense of Sterling weakness, weighing down on anti-fiat gold prices which may now find confirming a technical bullish break more difficult. Sentiment also fell apart later in the day after the S&P 500 lacked the momentum to find follow-through after gains in European benchmark stock indexes. It ended the day about 0.1% lower as resistance at 2824 held.

Risk appetite falling apart may have been because of trade war concerns. A meeting between US President Donald Trump and China’s Xi Jinping was pushed back to at least April. Meanwhile, the EU Parliament voted against resuming trade talks with the US. The pro-risk Australian Dollar fell while the anti-risk Swiss Franc gained, perhaps owing to its status as a regional haven to European geopolitical concerns.

The New Zealand Dollar got a slight boost as domestic manufacturing PMI data beat expectations early into Friday’s trading session. At an unscheduled time during the Asia Pacific trading session, the Bank of Japan interest rate decision will cross the wires.

While it is expected to leave its policy-setting tools unchanged, it may downgrade economic forecasts amidst slowing global growth, just as most other central banks have been doing. S&P 500 futures are little changed, suggesting perhaps a mixed session for APAC equities in the immediate sense. 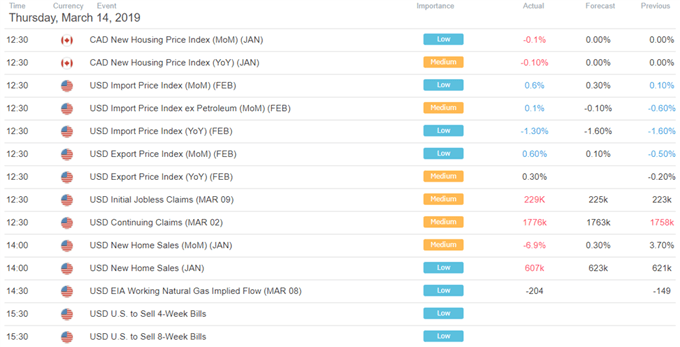