GBP: GBPUSD is once again on the backfoot with the pairing posting a fresh 3-month low as Theresa May meets the 1922 Committee over her departure date (full story). The pair is testing support at 1.2800 in which a break below could open up a move towards 1.2770. Theresa May has been pressured to announce her departure date, however, failure to do so could force the 1922 committee to lay a departure date for the Prime Minister. Political uncertainty continues to keep gains in the Pound limit.

AUD: The Australian Dollar softened on the back of the latest jobs report, in which the unemployment rate ticked up for the second consecutive month (rising to 5.2% from 5.0%). Consequently, this has fuelled expectations that the RBA will cut rates at the upcoming meeting (60% priced in for a cut), given that the uptick in the unemployment rate has also coincided with the sizeable drop in inflation. Eyes on RBA Governor Lowe next week.

“Members also discussed the scenario where inflation did not move any higher and unemployment trended up, noting that a decrease in the cash rate would likely be appropriate in these circumstances”(RBA April meeting minutes)

Oil: Despite the increased trade war tensions, oil prices remain dictated by the rising geopolitical premium attached to the rift between Iran and the US. Brent crude futures are up over 3% since President Trump escalated trade war tensions, suggesting that traders are concerned over potential supply disruptions stemming from the middle east, particularly after Saudi oil tankers had been attacked. The latest uptick in oil prices followed reports that the Saudi Prince had accused Iran of ordering Houthi attacks on Saudi Aramco facilities. 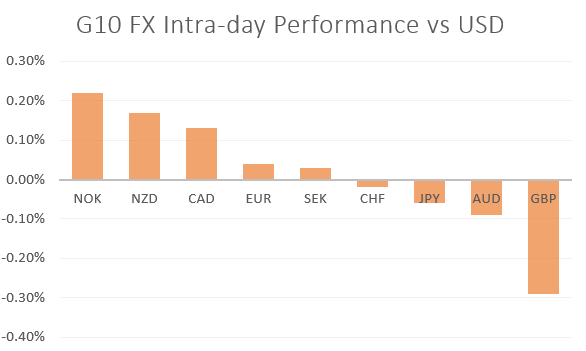