MARKET DEVELOPMENT – GBPUSD Choppy, Theresa May Resigns, What Next?

GBP: The Pound has traded in choppy fashion after Theresa May announced her resignation. In an immediate reaction to the news GBPUSD had saw a modest lift higher towards Wednesday high at 1.2720, before quickly retracing, while EURGBP tested the 0.88 handle. (Full story)

Whoever the next Prime Minister is, the divided opinion in the political landscape remains the same and while it is difficult to predict the near term outcome in UK politics, there is an increased risk of a general election by the autumn, potentially leading to another extension to A50 (currently set to expire by October 31st). At the time, the risk of a no deal has been increased once again.

GBP Bears Beware: Boris as UK Prime Minister Might be Good for Sterling

Oil: Following yesterday’s plunge in the energy complex, oil prices are set for its largest weekly loss in 2019 as concerns over a global slowdown raises fears over reduced demand. However, given the overextended drop in yesterday’s price action, Brent and WTI crude futures have recouped some losses. Alongside this, the backwardation (typically a bullish signal) in the oil curve has steepened, which in turn places the focus on potential supply outages stemming from rising geopolitical tensions. 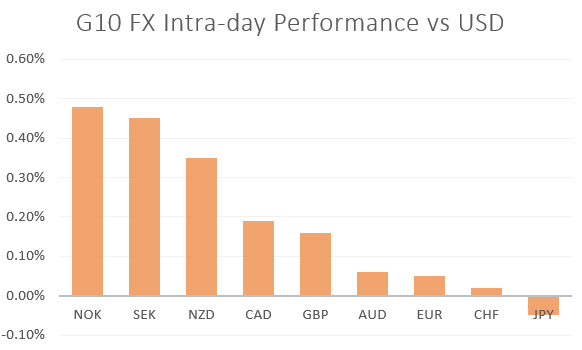