Looking for longer-term forecasts on the British Pound? Check out the DailyFX Trading Guides

UK PM Theresa May’s EU-UK Withdrawal Agreement has been defeated again, this time by a margin of 286 votes in favor to 344 against. The third failed vote now puts the prime minister in the uneasy position of feeling immense pressure to resign.

After reaching an agreement with the European Commission to extend the Brexit deadline to April 12, the failure of the third vote means that a no–deal, ‘hard Brexit’ is possible in two weeks time. This can still occur despite British MPs voting previously against no-deal Brexit as the motion was not legally binding – hard Brexit thus remains the legal default. 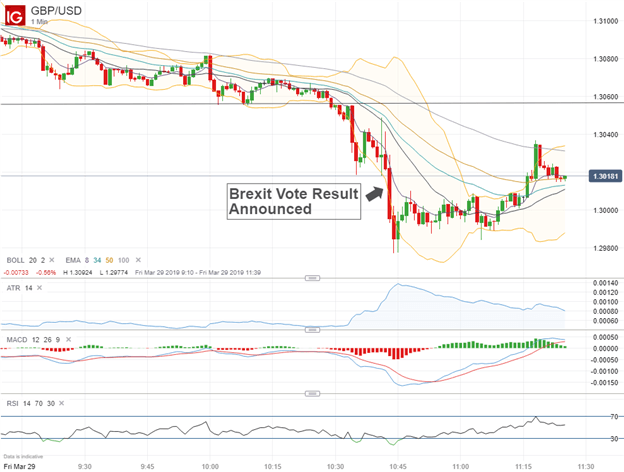 In response to today’s third ‘meaningful vote’ results, European Commission President Donald Tusk has called for an emergency summit on April 10 in hopes to avoid the worst-case scenario as the fate of Brexit – as well as GBP and the UK’s economy – hangs in limbo.

However, Tusk and other EU leaders have adamantly stated that the European Council will not re-open Brexit discussions to further negotiate outstanding issues like the Irish backstop which has caused much of the impasse. As such, the vast uncertainty surrounding Brexit has recently pushed GBP implied volatility to extremes.