Across the major G10 FX pairs, 1-day implied volatility has edged higher, particularly in the commodity linked currencies (AUD, NZD). However, as has been the case in recent times, FX volatility remains subdued. 1-weeks implied vols are marginally lower, given the upcoming market holidays while key central bank and data points are somewhat lacking this week. Nevertheless, volatility has arisen in the emerging market complex stemming from Turkey amid the deteriorating economic fundamentals.

GBPUSD: Unsurprisingly, the UK and EU had agreed to a Brexit extension at the emergency EU summit (October 31st deadline). Given that this had largely been priced in and with the COT report highlighting that GBP net positions were neutral, little in the way of upside had been observed following the extension announcement. However, what had gained much of the attention had been the tumble in GBP implied volatility across the board as the concerns over Brexit eased, while GBP risk reversals edged higher as demand for puts were pared. Eyes will be on UK data throughout the holiday shortened week, but due to the fact that a Brexit deal has yet to be reached, the Bank of England will remain tight-lipped until a deal has been finalised. 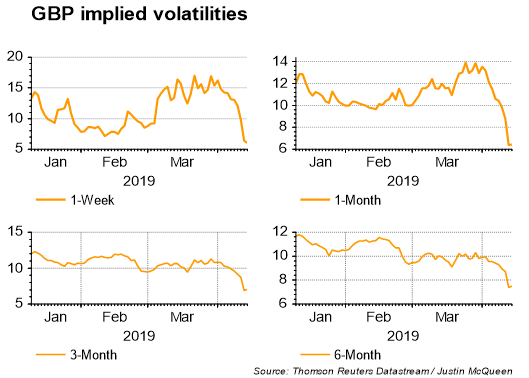 EURUSD: Last week, we noted that EURUSD risk reversals had moved to positive (demand for upside protection), suggesting that the Euro may have bottomed in the near term. Since then, EURUSD has reclaimed the 1.13 handle following the improvement in Chinese data, while Brexit concerns have also eased. This week, focus will be placed on tomorrow’s German ZEW report, alongside the slew of Euro-Area PMI releases on Thursday. A notable rebound in these figures may fuel the belief that the Eurozone may be beginning to show signs of a Q2 rebound, thus provide a further lift to EURUSD. Keep in mind that, given the stretched positioning in EURUSD, according to the COT data, much of the negative news has been priced into the Euro. Implied move for the week is at 54pips.

AUDUSD & NZDUSD: With risk sentiment given a boost following the recent Chinese data and with a potential trade deal between the US and China drawing near. Implied volatility in both the Aussie and Kiwi have jumped. While this also comes ahead of key data points from both countries with NZ CPI on Tuesday and AU Jobs report on Thursday. 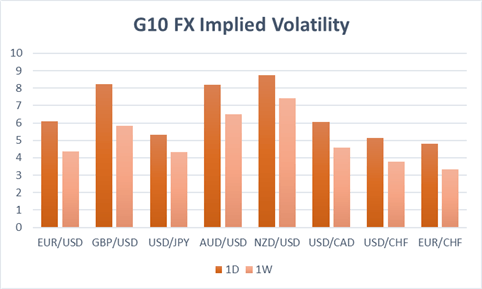 USDTRY: While implied volatility is continuing to ease among major FX pairs, an area where volatility is gaining, is the Turkish Lira. With Turkey already in a recession and punitive interest rates weighing on activity, downside risks to Turkey are mounting with the current recession set to deepen. As such, implied volatility is back on the rise with investors seeking demand for USDTRY calls (hedging against further upside), which in turn could see USDTRY with a 6.00 handle in the near future. 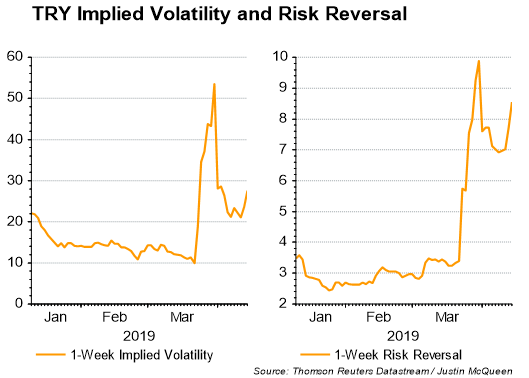