GBP: Unsurprisingly, cross party talks between the government and Labour party have collapsed. However, this did push GBP to session lows, having a made a break below support at 1.2770 (noted Wednesday), while GBPJPY tripped through 140.00. While the pressure is continuing to rise for PM May to offer her resignation, the risk is who will replace her. A hard Brexiteer could see GBP drop even lower, which places 1.2670 in sight. As a reminder, Boris Johnson is leading in the betting markets to replace PM May.

CNY/CNH: Since President Trump escalated trade war tensions, the Chinese Yuan has been in freefall with the currency now eyeing a move towards the November 2018 peak (6.98). However, focus is on the psychological floating peg at the 7.00, whereby any attempt to push through could spark a bout of FX intervention. Of note, source reports stated that the PBoC will not let USDCNY go above 7.00.

AUD / CAD: As the US-China trade tensions continue to hold its grip on markets, the high beta Aussie has been on the defensive yet again. Elsewhere, the Canadian Dollar has failed to be lifted by the pick up in oil prices with wider US/CA bonds spreads weighing on the currency, alongside the drop in the Yuan. 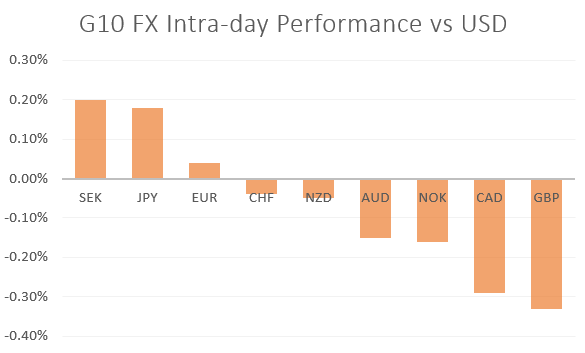