USD: A relatively muted session thus far with major USD pairs trading in tight ranges. The greenback has managed to pare marginal losses reclaiming the 98.00 handle as US 10yr yields reclaim 2.5%. However, the USD index is slightly weaker against its counterparts with marginal outperformance seen in the AUD. Elsewhere, the latest COT report showed speculators adding to their net long USD positioning, while Euro shorts are now approaching the peaks seen in 2015 and 2016 (full story)

GBP: The Pound has held support at 1.29, in what is likely to be a big week for the currency with eyes on the local elections, in which the Conservative party are expected to perform poorly given the governments inability to provide much in the way of progress on Brexit. Elsewhere, the BoE will provide its monetary policy and quarterly inflation report, whereby an optimistic stance could see GBPUSD hold above 1.29.

EUR: The Euro is relatively flat, hovering around 1.1150 with the relief from the fall-out of the Spanish election and the S&P maintaining Italy’s sovereign credit rating had been offset by the slightly weaker than expected Eurozone sentiment figures (full story).

Crude Oil: Following Friday’s sell-off, oil prices continued to extend its declines with Brent crude slipping 0.4%, however, support from Friday’s low has helped oil prices recover slightly with Brent crude back above $71/bbl. This week will see Iranian oil waivers expire which is set to leave the oil market in a fragile state and increase the risk of a potential supply crunch. As such, eyes will be on the commentary from Saudi Arabia who have the capacity to make up the oil supply lost from Iran. 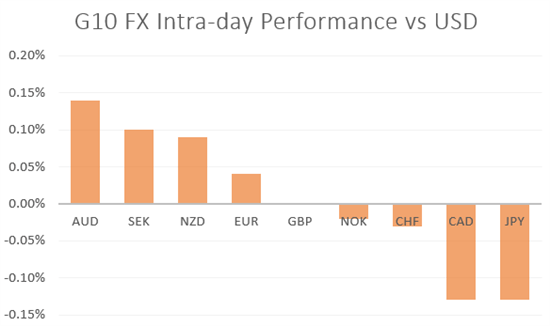