NZD: The New Zealand Dollar came under pressure after a relatively weak jobs reports, in which jobs growth in Q1 contracted, while wage growth also missed forecasts and the RBNZ’s expectations. Consequently, this led to increased bets that the RBNZ could lower interest rates next week with money markets now pricing in a 60% chance of a 25bps cut. With rate decisions from the RBNZ and RBA scheduled next, AUDNZD implied volatility is the highest since early 2018.

USD: The USD has managed to pare its earlier losses following a stellar ADP report, which rose 275k (Exp. 180k), while the prior month also been revised higher. However, ADP data has often had a wide deviation from the NFP figure. Elsewhere, focus will be on the FOMC meeting, where eyes will be on any optimistic commentary regarding the economic environment, given the central bank is widely expected to keep interest rates on hold.

GBP: The Pound remains on the front foot with eyes on the Bank of England rate decision, whereby there is a risk that the central bank provides a hawkish hold. The latest Brexit developments have been relatively muted this past week. However, the opposition labour party has hinted that the government could potentially shift from their current Brexit stance. 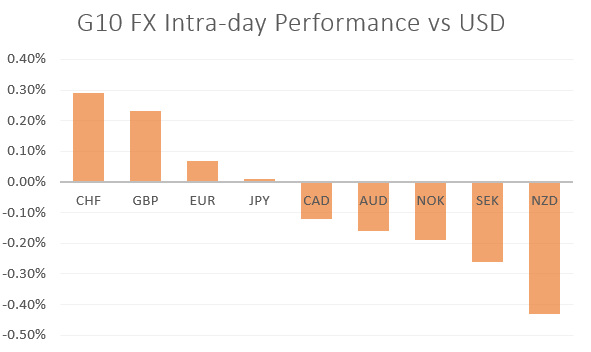