The British Pound is firmer Wednesday after UK Prime Minister Theresa May said she would talk to Labour Party leader Jeremy Corbyn in an effort to find a Brexit compromise, and seek EU agreement on a Brexit delay. That has improved the outlook for Sterling, which is now well placed to make further gains. 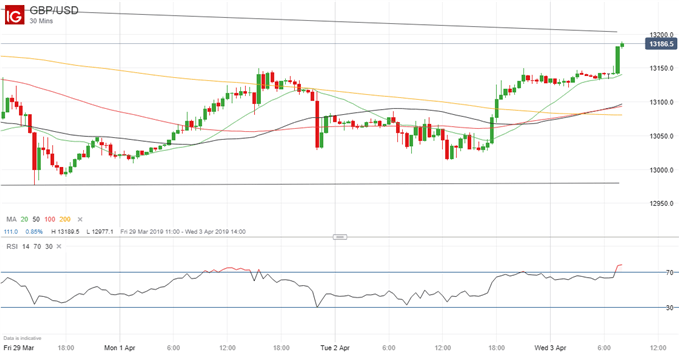 The talks, which could start as early as today, Wednesday, have raised hopes of a softer Brexit, perhaps involving a customs union between the UK and the EU, access to the single market and a confirmatory public vote on any deal reached.

The 1.32 level for GBPUSD now looks plausible near-term even though the pair already looks overbought. However, given the reported animosity between May and Corbyn, a breakthrough could still prove elusive – particularly if she fails to prevent an even deeper split within her ruling Conservative Party.

Domestic politics aside, the next key date for GBP traders could be April 10, when EU leaders are scheduled to meet to consider the UK’s Brexit plans. The current leaving date is April 12.

You can read more on the technical outlook for GBP here