See our quarterly GBP forecast to learn what will drive prices throughout Q1.

Since Theresa May promised parliament that MPs will vote on the Withdrawal Agreement (Mar 12th), no-deal (Mar 13th) and an Article 50 extension (Mar 14th), GBP has gained across the board, hitting 7-month highs vs USD and the best level since May 2017 vs EUR. Largely on the basis that no-deal risks have eased quite considerable, while the likelihood of an Article 50 extension have also increased, consequently suggesting that the approach to Brexit is softening. This was further reinforced by MPs voting to pass the cooper amendment yesterday, which puts Theresa May’s pledge to hold a vote on Brexit delay in writing.

With just one month till the scheduled Brexit date, 1M option expiry now covers this. However, risk premiums have not seen a notable lift, implying that markets do not see a significant risk that the UK will leave the EU with a no-deal. Alongside this, while GBP 1M risk reversals remain in negative (higher premium for puts vs calls), this has not been extended to extreme levels, further suggesting that a no-deal has likely been avoided.

Uncertainty to Persist Despite Possible Extension

While the probability of a Brexit delay of 2-3 months have increased. This does not necessarily mean that the Brexit uncertainty will not continue to linger given that it is not entirely certain whether a significant change will be made. However, through the process of elimination the threat of a no-deal would continue to recede, which in turn could lift GBPUSD towards 1.35. 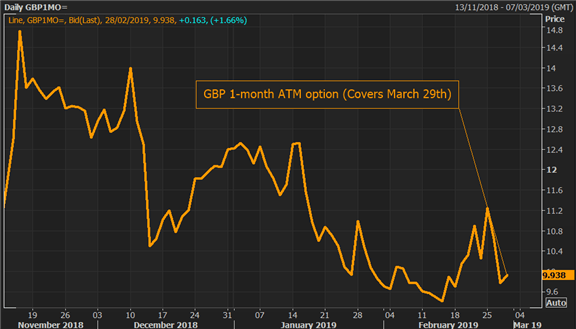 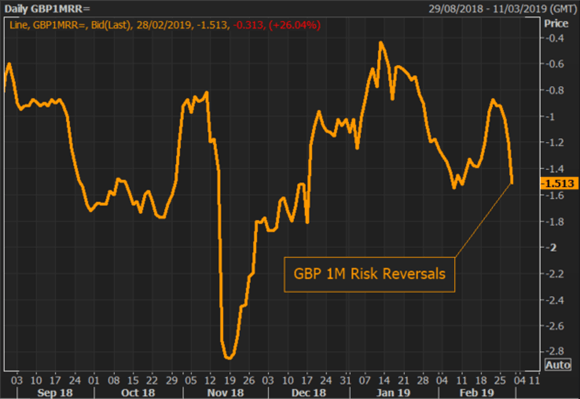