GBPUSD Buffeted by Both Sides of the Pair

GBPUSD touched a two-month low yesterday on a combination of increased Brexit concerns and a strong US dollar which touched a fresh 22-month high. Volatility in the pair is expected to pick-up as UK PM May tries, yet again, to get her Withdrawal Agreement passed before the European elections at the end of next month.

Brexit discussions returned after the Easter parliamentary recess with talk that some MPs are trying to force another vote of confidence in PM May, despite rules stopping a vote until December. Senior Conservative MPs are becoming increasingly concerned that upcoming elections could see the Tory party lose swathes of votes and want to force PM May to state her departure date before the European elections. PM May is also rumored to be looking to place the Withdrawal Agreement back in front of Parliament for the fourth time to see if she can force it through. The next few days will see Brexit conjecture and likely animosity increase, putting Sterling at risk.

GBPUSD is also under pressure from a strong US dollar which Tuesday touched a 22-month high on expectations that US interest rates will not be cut again this year. US Q1 GDP data out on Friday will give the market more information on the strength of the US economy. The greenback is also benefitting from economic weakness around the globe and positive US Treasury yield differentials compared to most G-7 counterparts.

GBPUSD trades around 1.2940 after having dipped to a new two-month low of 1.2916 earlier in the session. Cable now trades under the floor of the recent dominant descending triangle – around 1.2965 – that provided support in recent weeks. GBPUSD is also now below all three moving averages and is closing in on the 23.6% Fibonacci retracement level at 1.2894. The market looks oversold using the CCI indicator and this may slow the current sell-off. 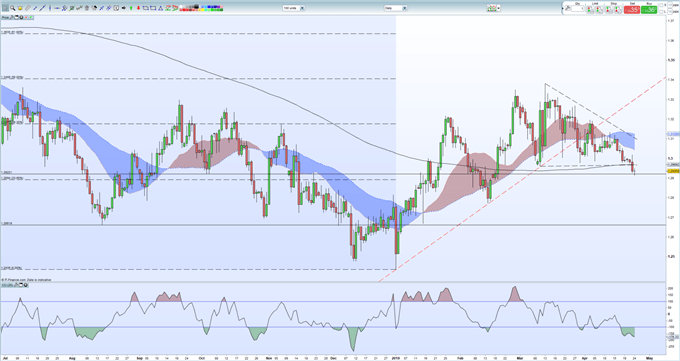 What is your view on Sterling (GBP) – bullish or bearish?? You can let us know via the form at the end of this piece or you can contact the author at [email protected]or via Twitter @nickcawley1.