– Without a new Quarterly Inflation Report, the Bank of England had little choice but to sit on their hands and keep policy in check all-around.

– In what may have been the quietest reaction in several years, GBPUSD traded in a 20-pip range immediately after the rate decision was announced.

– Retail traders are mixed on the British Pound, but have been trimming net-long positioning in recent days.

It should come as no surprise to anyone that the Bank of England kept rates on hold today. Such an economic and/or financial environment wrought with interference from UK domestic politics has left little room for the BOE’s Monetary Policy Committee to operate, one way or the other. The reaction by GBPUSD says it all: within the first 10-minutes of the announcement, the range was a mere 20-pips between 1.3108 and 1.3128.

Expectations were Low for the BOE Meeting

With the specter of a potential no deal, “hard Brexit” lingering as the March 29 deadline approaches, UK PM Theresa May finds herself pleading with EU officials in Brussels for an extension. While EU officials have been open to the idea of an extension, we haven’t seen the UK and EU come eye-to-eye yet on an exact date. The issue of the EU parliamentary elections in early-July is in play, as the EU would prefer to have the UK out of the union before the elections take place. 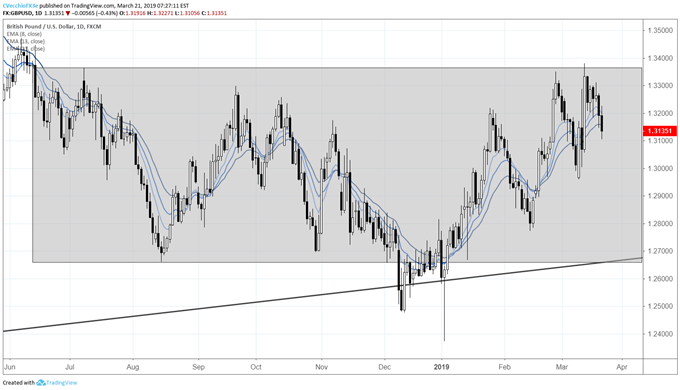 While implied volatility levels have started to spike for various GBP-crosses, perhaps taking a step back and looking at the big picture is more important. After all, since the bearish outside engulfing bar set on June 14, 2018, GBPUSD has spent more than 92% of its time trading between 1.2660 and 1.3365 (that is, price was within said range at some point during the trading day).

With all of the Brexit headlines swirling about, traders may feel that it’s best to wait for definitive news and a definitive range break before staking out a significant position.