The increase in UK average weekly earnings was unchanged at 3.5% year/year in the three months to February, suggesting that inflationary pressures are building in the UK economy. Separate data due Wednesday are expected to reveal that the CPI measure of inflation climbed to 2.0% year/year in March, up from 1.9% but still showing that real wages are rising and that inflationary pressures in the UK economy are therefore building.

In normal times, that would mean growing speculation on an interest rate increase by the Bank of England and therefore a climb in GBPUSD and the GBP crosses. However, the central bank is most unlikely to raise rates until there is more clarity on Brexit – and the next rate move could yet be down.

GBPUSD was lifted by the latest figures but longer-term it continues to ease from the highs seen a month ago and that trend lower could well continue particularly as, from a technical perspective, the pair remains in a bearish descending triangle chart pattern. 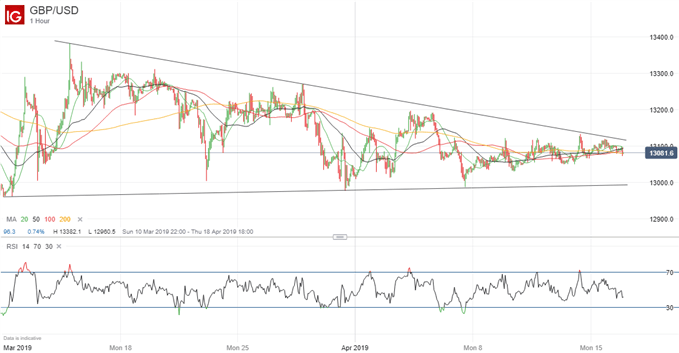 Note that no important Brexit developments are expected this week while the Westminster Parliament remains on its Easter break.

Looking at the data in more depth, average earnings excluding bonuses increased by 3.4%, down from 3.5%, and there was bad news from the jobs data. Employment rose by only 179,000 in February, down from a 222,000 increase the month before although the unemployment rate was unchanged at 3.9%.

You can find more detail on the DailyFX calendar here

Wednesday’s numbers are also expected to show a small increase in the core inflation rate year/year. However, there should be better news from Thursday’s retail sales data, with economists predicting a year/year increase of 4.6% in March, up from 4.0%.