Brexit talks between the UK Government and the Opposition Labour Party are unlikely to result in a deal this week and that could put near-term downward pressure on GBPUSD.

According to the BBC’s Political Editor Laura Kuenssberg, a temporary customs union on offer from Prime Minister Theresa May to Labour does not add up to anything substantially new and, while it is still possible to see a way to a Brexit deal, the issue is unlikely to be resolved this week. Clouds over May’s leadership also make it harder by the day to get anything agreed on Brexit, she added on Twitter.

In response, GBPUSD is losing ground in Europe Tuesday. 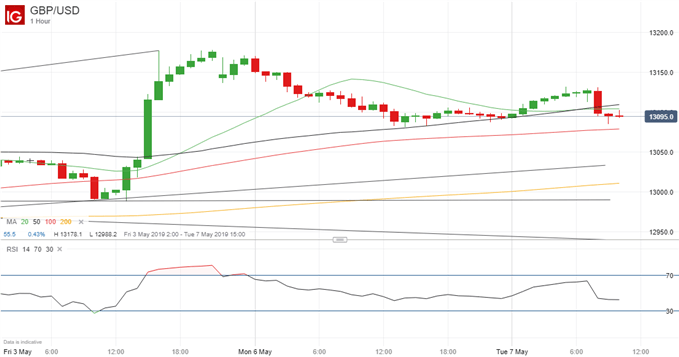 With rumors continuing to swirl about how long May can continue as Prime Minister, Labour seems worried that any deal reached in the cross-party talks could be jettisoned by a new leader. Meanwhile, data on new car sales in the UK showed a fall to 161,064 in April from 458,054 in March, emphasizing the weakness of the UK economy.

While no change in the UK Bank Rate was expected any time soon, these latest developments will likely push even further into the future any rate increase by the Bank of England to keep inflation close to its 2% target.

As for the technical outlook for GBPUSD, Monday’s drop while the London market was closed for a holiday has left it struggling to maintain the 1.31 level and any drop through the psychologically important 1.30 level would damage sentiment further.

You can find the DailyFX forecasts for GBP in Q1 here