No Deal Brexit Looming According to the EU

All four of yesterday’s indicative votes failed to muster enough votes to pass through Parliament, prompting Sterling to give back all of Monday’s gains against a range of currencies. The British Pound had been boosted by thoughts that if the customs union proposal had passed that this would have strengthened PM May’s hand if/when she presents her withdrawal bill for the fourth time to the House. This now seems very unlikely and the UK’s options for leaving the EU are narrowing according to the block’s chief negotiator Michel Barnier. Barnier said after the results that the UK can either leave the EU and revert to WTO rules, accept the withdrawal agreement as it stands or there could be a long extension to the process which would involve the UK participating in the European Parliamentary elections. Barnier added that the UK would need ‘strong justification’ when asking for an extension as this would pose significant risks for the EU. He added that a no deal Brexit was becoming ‘more likely’ by the day.

GBPUSD slipped around one-and-a-half cents from an intraday high of 1.3150 before stabilizing. Cable currently trades around 1.3060 and refuses to price-in a no deal Brexit, a scenario that would see the pair fall back to at least 1.2000 and probably lower, according to many analysts’ predictions. Any move higher in GBPUSD will find resistance from the old trend support currently around 1.3135 and a decisive break and close above here is needed to boost sentiment in cable. The CCI indicator still shows the pair in oversold territory. Horizontal support from last Friday’s low at 1.2972 ahead of the 200-day moving average at 1.2950 and the 23.6% Fibonacci retracement level at 1.2894. 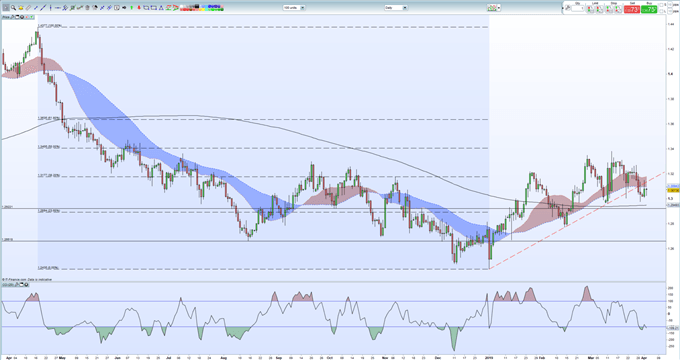 What is your view on Sterling – bullish or bearish?? You can let us know via the form at the end of this piece or you can contact the author at nicholas.cawley@ig.comor via Twitter @nickcawley1.