UK PM Theresa May seemingly refuses to leave No.10 or even countenance her resignation, making a mockery of the UK and slamming Sterling in the foreign exchange markets. The respected Leader of the House Andrea Leadsom resigned last night over PM May’s latest Brexit bill, sparking fears of further resignations that would leave PM May totally isolated. Some newspapers are also running stories saying that PM May refused to meet three senior Conservative ministers Wednesday who had demanded talks over the ‘new deal’.

There are renewed rumors that UK PM May will resign tomorrow (Friday), yet nothing can be taken for granted. It is also said that the 1922 Committee has given PM May until Friday to tender her resignation or they will reveal the result of a secret vote taken Wednesday. The result of the vote, on whether to allow another vote of no confidence – is sealed.

GBPUSD Hammered on Brexit Backlash – Is This the End for UK PM May?

While Brexit isn’t new and has long been factored into the price of Sterling, the latest political shambles could leave Sterling adrift as investors abandon the British Pound. GBPUSD is now touching 1.2600, the lowest level since early January, and could conceivable make a run at the January 2 ‘spike low’ at 1.2435. There seems little in the way of support for GBPUSD, although the CCI indicator does show the pair as being oversold. The chart shows that there are now 15 bear candles in a row – excluding May 12 weekend candle – and this adds to the belief that GBPUSD may snap back if – and it’s a big if – PM May tenders her resignation shortly, removing at least one layer of political risk. 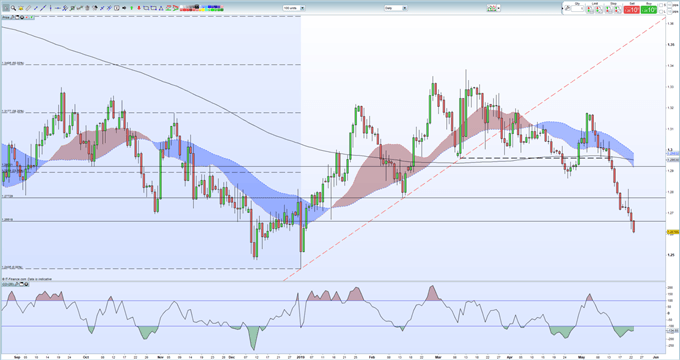