The political backdrop in the UK has become increasingly unstable after the latest cross-party talks fail to find any common ground, leaving UK PM Theresa May’s leadership untenable. After the talks broke down, Labour leader Jeremy Corbyn highlighted the ‘increasing weakness and instability’ of PM May’s administration, adding that despite detailed discussions without significant changes ‘we will continue to oppose the Government’s deal’. PM May recently said that she would present the Withdrawal Agreement to Parliament again early in June.

GBPUSD has fallen from a weekly high of 1.3040 to a current level of 1.2755, the lowest price since mid-January, primarily on the ongoing political backlash and aided by a strong US dollar. If the January ‘spike’ low at 1.2670 is broken convincingly, then 1.2435 becomes a potential target. If GBPUSD trades below here the pair will be back at lows last seen in April 2017. This week’s sharp sell-off has caused the CCI indicator to sound an oversold warning which may temper further sharp downside action going into the weekend. 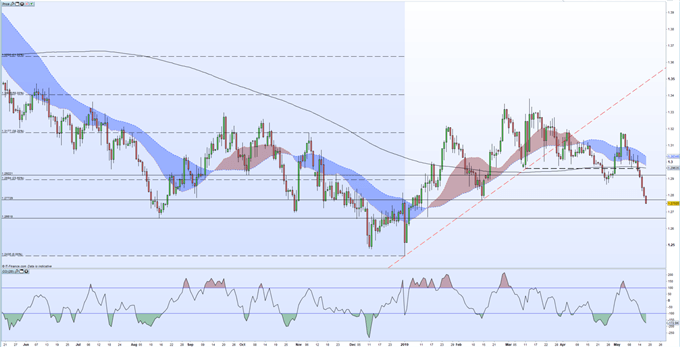 Retail traders are 79.4% net-long GBPUSD according to the latest IG Client Sentiment Data. See how recent daily and weekly positional changes affect GBPUSD and currently give us a mixed trading bias.