GBP/USD remains under pressure ahead of the European Parliament elections as Prime Minister Theresa May struggles to make progress on the Brexit deal, but recent price action raises the risk for a rebound in the Pound Dollar exchange rate as it snaps the series of lower highs & low from earlier this month. 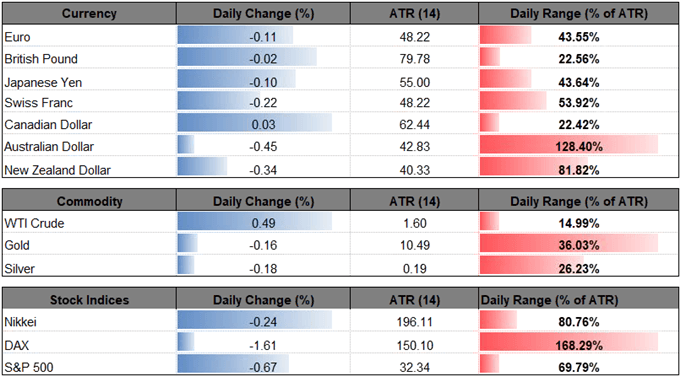 It remains to be seen if the EU election will impact the Brexit negotiations as households select fresh representatives to the European Parliament, and the ongoing rift between U.K. lawmakers may produce headwinds for the British Pound as it puts pressure on the Bank of England (BoE) to abandon the hiking-cycle.

A recent speech by Deputy GovernorBen Broadbent suggests the BoE will remain on the sidelines as the Monetary Policy Committee (MPC) member points out that ‘business investment fell in every quarter last year and surveys suggest the underlying trend is still negative.’ In turn, the BoE may stick to the same script at the next meeting on June 20 as the committee ‘judges that there is currently a small margin of excess supply in the economy,’ and the wait-and-see approach for monetary policy may continue to drag on the British Pound as Governor Mark Carney and Co. reiterate that ‘the economic outlook will continue to depend significantly on the nature and timing of EU withdrawal.’

However, fresh updates to the U.K. Consumer Price Index (CPI) may prop up the British Pound as both the headline and core reading for inflation are expected to pick up in April, and signs of sticky price growth may keep the BoE on track to further normalize monetary policy as ‘the Committee judges that, were the economy to develop broadly in line with its Inflation Report projections, an ongoing tightening of monetary policy over the forecast period, at a gradual pace and to a limited extent, would be appropriate to return inflation sustainably to the 2% target at a conventional horizon.’

With that said, GBP/USD may face increased volatility over the coming days, but the near-term decline in the Pound Dollar exchange rate appears to have shaken up market participation as retail sentiment remains stretched. 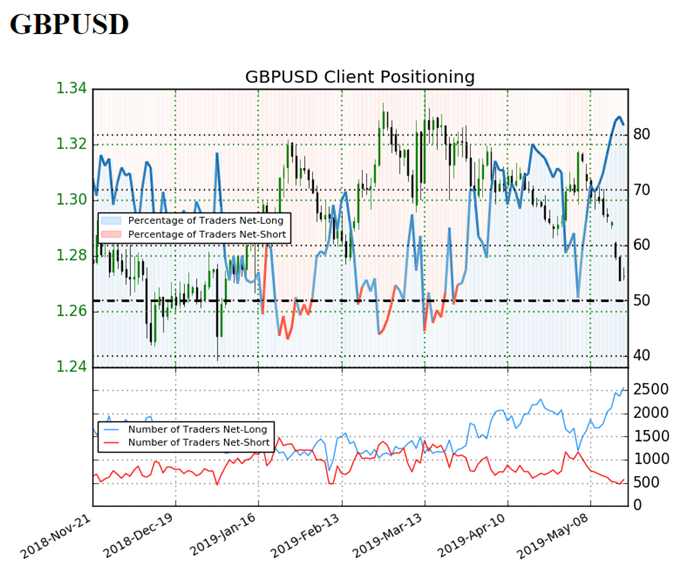 The IG Client Sentiment Report shows 81.7%of traders are net-long GBP/USD compared to 73.7% at the end of April, with the ratio of traders long to short at 4.47 to 1. Keep in mind, traders have remained net-long since March 26 when GBP/USD traded near 1.3210 region even though price has moved 3.3% lower since then.

Profit-taking behavior may explain the ongoing decline in net-short interest as GBP/USD sits near the monthly-low (1.2711), but the extreme reading in net-long position suggests the retail crowd is still attempting to fade the recent decline in the pound-dollar exchange rate as its sits near the highest reading for 2019.

The persistent tilted in retail interest offers a contrarian view to crowd sentiment especially as GBP/USD snaps the bullish trend from late-2018, with the Relative Strength Index (RSI) highlighting a similar dynamic, but recent price action raises the risk for a near-term rebound as the exchange rate fails to extend the series of lower highs & lows from the previous week. 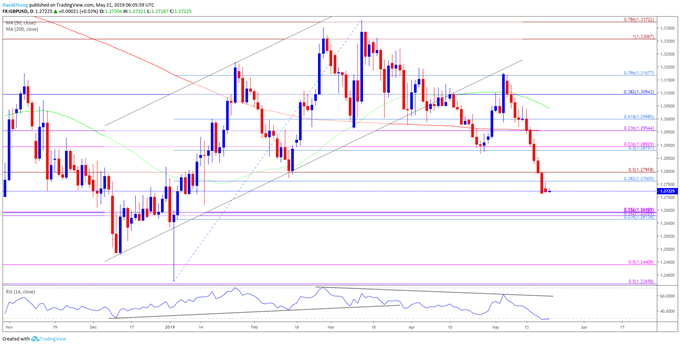 For more in-depth analysis, check out the 2Q 2019 Forecast for GBP