The British House of Commons voted down Prime Minister Theresa May’s renegotiated Brexit deal 391-242. The GBPUSD shot higher immediately following the news on the increased likelihood that the March 29 deadline will be extended. 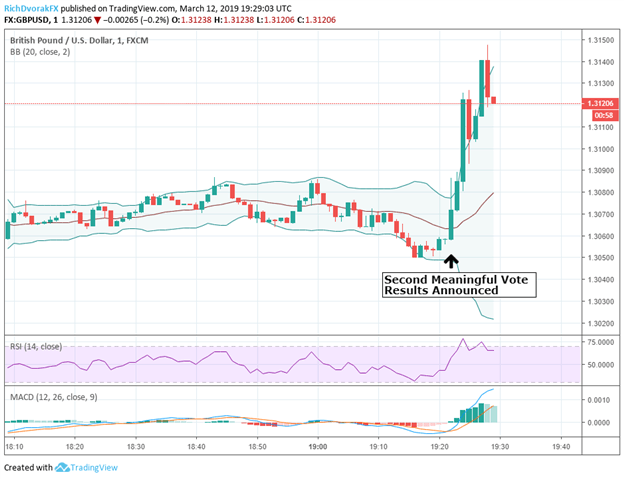 The rejected deal follows PM May’s record-breaking defeat in January over her original withdrawal agreement. After today’s results were announced, the Prime Minister stated that Parliament will vote tomorrow on departing the European Union without a deal – commonly referred to as a ‘hard-Brexit.’ If the House of Commons refuses to back a no-deal departure, MPs will vote Thursday on extending Article 50 which would push back the March 29 deadline. The heightened probability that Brexit will be delayed is contributing to Sterling’s push higher.

However, GBP prices whipsawed leading up to today’s defeat as a whirlwind of events that initially propelled the Pound higher against the US Dollar and Euro saw a quick reversal when headlines broke that Brexit Attorney General Cox’s legal opinion remained essentially unchanged.

Although the fresh concessions offered by the European Council’s Donald Dusk did ‘reduce the risk’ that the UK could be indefinitely and involuntarily held in the EU over the Irish backstop, GBP bulls were left on the hook hoping the Prime Minister could strong-arm enough support in the hours and minutes leading up to the vote.

But, British MPs began leaking word that they would not back May’s deal following Cox’s recommendation. Furthermore, pro-Brexit conservatives declared their ownlegal analysis of the revised offer as insufficient, concluding with a recommendation against the Prime Minister’s newly-brokered deal.

GBP selling pressure mounted in response as markets priced in lower odds of the withdrawal agreement garnering enough support for today’s vote. In light of this, currency traders were likely unsurprised by the hefty price swings experienced over the last 24 hours seeing that GBPUSD overnight implied volatility skyrocketed to its highest level since June 2017 leading up to today’s second meaningful vote.

Also worth mentioning is commentary from the PM’s spokeswoman who stated after the vote that Theresa May has not discussed resigning from her position. The spokeswoman added that the EU has sent a clear message they do not intend on negotiating further over the Irish backstop, but this is notwithstanding the EU’s openness to considering ‘reasoned requests’ from the UK to delay Brexit.