The British Pound was the best-performing major on Tuesday ahead of this week’s Bank of England rate decision. Though its appreciation may have been due to Brexit-related fundamentals. UK Foreign Secretary Jeremy Hunt warned against a change of leadership, a rising concern for Prime Minister Theresa May, as it could delay the EU-UK divorce. Avoiding the extra uncertainties that this may pose increases Sterling’s relative appeal.

Weakness in the US Dollar ahead of Wednesday’s FOMC rate decision also aided to GBP’s cause. Most of the declines in the Greenback occurred during European hours where a slew of better-than-expected regional economic data crossed the wires. This included rosy Eurozone GDP, German CPI and as Italy’s economy slowly exited the technical definition of a recession. EUR/USD closed above near-term resistance.

On the daily chart, GBP/USD broke above a near-term falling trend line going back to March. This followed a bottom after falling under the rising support line from the end of December. Confirming another close to the upside opens the door to overturning GBP’s recent downtrend. Otherwise, turning lower places near-term support between 1.2866 and 1.2888. 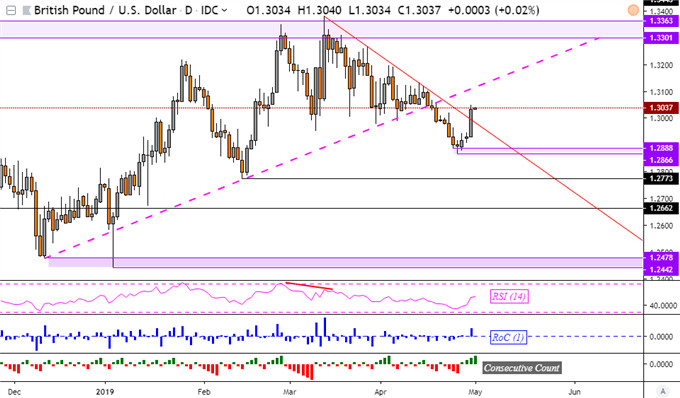 Despite initially falling on softer-than-expected local GDP data, the Canadian Dollar was another solid performer on Tuesday. Rosy commentary from Bank of Canada Governor Stephen Poloz later in the day boosted CAD. He expects the economy to accelerate in the second half of this year, undermining dovish bets that were fueled by February’s disappointing growth figures.

The New Zealand Dollar is off to a rocky start in early Wednesday trade following a weaker-than-expected local jobs report. Accompanying a decrease in the unemployment rate was the smallest labor force participation reading since the second quarter of 2017. This suggested that this may be have been as a result of discouraged workers exiting the workforce.

Aside from that, Wednesday’s Asia Pacific trading session is lacking notable economic event risk. This places the focus on risk trends. S&P 500 futures are pointing notably higher following rosy Apple earnings. But market optimism will be tested on the Fed rate decision. Meanwhile, sentiment readings warn. that the S&P 500 could still top.