The US Dollar outperformed against most currencies this past week as increasing concerns about global growth engulfed financial markets. Economic statistics such as dismal Australian GDP and Chinese trade balance added fuel to this. Meanwhile, central banks such as the Bank of Canada and ECB projected more uncertainty ahead. The latter dramatically lowered growth estimates, plunging the Euro.

The S&P 500 had its worst losing streak since the middle of December. Sentiment-linked ASEAN currencies understandably underperformed, with USD/IDRrising by the most since June 2018. These developments fueled demand for the haven-linked Greenback. It continues to stand tall despite a lack of support from interest rate hike expectations.

Another notable underperformed was the Philippine Peso, which got a surprise from the nation’s President Rodrigo Duterte. He unexpectedly appointed Benjamin Diokno as the new Governor of the Philippine central bank. In the past, he favored fiscal policies that supported growth while tolerating high inflation. Speaking of, domestic CPI fell to 3.8% which was the slowest pace of inflation since beginning 2018. 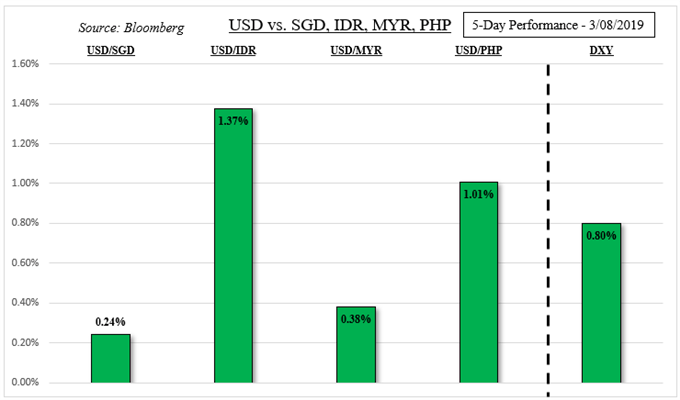 The regional ASEAN economic calendar docket is relatively thin with items such as Philippine and Indonesian trade data. Weak Chinese import and exports last week might have some knock-on effects on these two nations given their important trading relationships with the world’s second-largest economy. Out of China, keep a close eye on local retail sales and industrial production which may disappoint.

Externally, most of the focus will turn to the US next week for risk trends. The world, which is being slowly shaken by fears of economic weakness, is watching the Earth’s largest economy after it added jobs by the least since 2017. But, its growth rate arguably remains well above its major counterparts (see chart below). From the US, we will get retail sales, CPI, durable goods orders and sentiment data.

US Economic Growth Remains Above its Major Counterparts 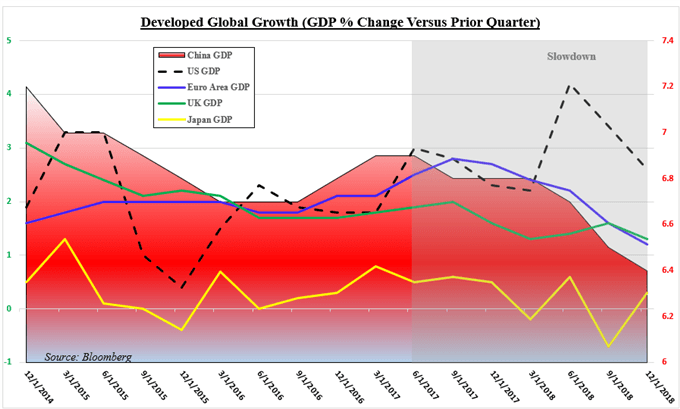 Outside of the US, Brexit developments remains a wildcard. Next week, UK Parliament will vote on Theresa May’s updated divorce deal which was previously rejected by a historical margin. If it happens again, a vote on ‘no-deal’ will be followed by another one to extend the March 29 leave deadline. This is of course if ‘no-deal’ is rejected.

Meanwhile, China is scheduled to conclude its National People’s Congress which may result in gloomier forecasts for economic growth. In these circumstances, the US Dollar’s liquidity status could benefit it if risk aversion kicks in again ahead. This leaves its ASEAN counterparts, such as the Singapore Dollar and Indonesian Rupiah, at risk. Technical warning signs hint that USD/PHP and USD/MYR have more room to rise.