Crude oil prices swung on Thursday, ending the day timidly to the upside after a wobbly session. Gains in the US Dollar weighed against the commodity as it is typically priced in the Greenback, making oil relatively cheaper. Markets can owe this to weakness in the British Pound as it lost momentum after the UK’s Parliament voted to extend the Brexit deadline of March 29.

Intraday losses were offset by the latest OPEC monthly market report, which urged producers to prevent a return of surplus this year. As anticipated, forecasts for world oil demand were trimmed. Slowing global growth may have played a part in this. The oil-producing cartel also highlighted the risks of non-OPEC production increasing, countering their efforts to keep supply in check.

Meanwhile, gold prices had their worst day since the beginning of this month. The anti-fiat commodity lost ground as the US Dollar appreciated. The S&P 500 declined on Thursday, with critical resistance holding at 2824, amidst rising concerns over US-China and US-EU trade wars. This undermined the notion that the precious metal is necessarily a safe haven.

After the OPEC report, attention for crude oil now turns to the International Energy Agency (IEA) for its monthly publication due later today. It may follow in the footsteps of OPEC and underline concerns about demand. Meanwhile, sentiment remains fragile in the wake of growing fears about trade wars. If the US Dollar gains on haven demand, that may continue weighing against the yellow metal.

Crude oil prices achieved another close above resistance at 57.93 as the commodity continues to set new 2019 highs. But, negative RSI divergence still clouds the technical outlook. This shows fading upside momentum and may precede a turn lower. Clearing support exposes 55.41 – 57.34. On the other hand, climbing will eventually bring the February 2016 trend line back in the spotlight (dashed red line on the chart below).

The bearish technical warning sign pointed out yesterday preceded a roughly one percent decline in XAU/USD on Thursday as anticipated. While this leaves gold’s push above the falling resistance line from February rather short-lived, prices stopped right on support at 1294 (early January highs). The next area of support appears to be 1276 to 1285. Otherwise, a push to the upside has resistance at 1311. 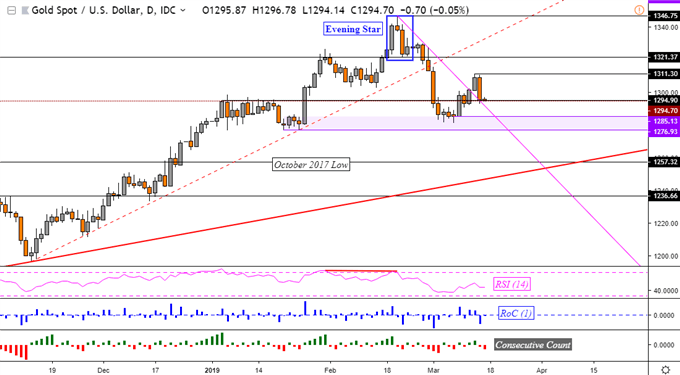