GBP: The Pound has been among the outperformers this morning, having made a move above the 1.31 handle. Following last week’s agreement to extend the Brexit deadline and with the UK parliament in recess, the Brexit concerns have eased slightly for now. As such, focus will be placed on the upcoming data points throughout the week.

EUR: In light of the recent Chinese data, the Euro has continued to maintain a foothold above 1.13. The latest COT report showed speculators added to their net shorts, which may begin to raise questions that positioning could be somewhat stretched and could add fuel to a modest Euro rebound, provided Euro-Area data shows signs of a recovery in Q2. Eyes on German ZEW and Euro-Area PMIs.

TRY: Investors were once again reminded of the concerns that Turkey are facing with today’s jobs report showing the unemployment rate rising to a 10yr high. Consequently, downside risks remain prominent for the Turkish Lira, while volatility is likely to pick-up ahead of next week’s rate decision, in which the focus on central bank independence will be brought back into question.

Gold: Given the improvement in risk sentiment, Gold prices have begun the week on the backfoot and thus is holding onto key support area at 1280-84/oz. A closing break below however, could pave the way for a move towards the 50% Fibonacci retracement situated at 1262/oz. 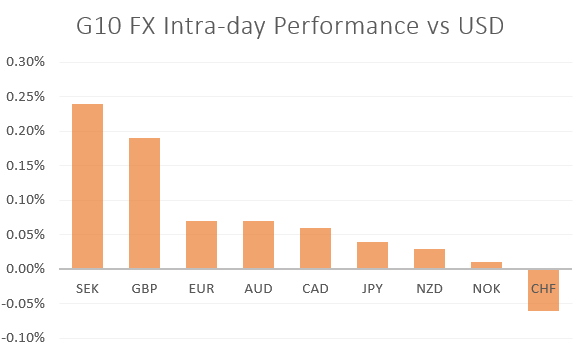