Gold prices briefly popped to highest levels in 14 months. Meanwhile, crude oil appears to trade in a bearish impulse wave that is incomplete.

The video above is a recording of a US Opening Bell webinar from June 10, 2019. We focused on the Elliott wave patterns for key markets such as gold, silver, crude oil, DXY, EURUSD, GBPUSD, NZDUSD, and USDJPY.

Waiting for a break in gold prices

Though we can count the minimum waves in place for the three-year sideways triangle to be complete at the May 2, 2019 low, this recent rally has not pushed high enough to confirm. If the triangle that began July 2016 is finished, then gold may forge a large rally pushing deep into the $1400’s and possibly $1500. A move above the ‘B’ wave high near $1365 would help this bullish scenario.

However, we are keeping in mind the alternate count in that Friday’s high near $1348 was simply wave ‘D’ of the three-year triangle. This implies another deep correction in gold to below $1250 and possibly the $1200 zone. A break down below $1265 would add further weight to the likelihood of a continuation on the triangle pattern. 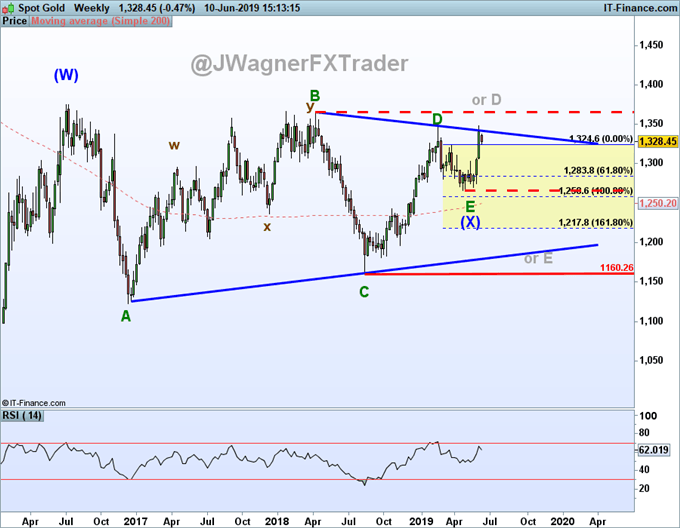 The move lower in crude oil prices from the April 2019 high appears to be taking the shape of an Elliott wave impulse. If so, we cannot count the minimum waves in place yet for the impulse. This suggests lower prices are likely on the horizon.

It appears the current Elliott wave for crude oil is wave ‘iv’. This wave may grind higher towards $55.75 and eventually meet the blue line on the four hour chart. If crude oil is successful in reaching $55.75, then we will be on the lookout for another turn lower in wave ‘v’.

Though not expected, if a rally continues up to and through $60.12, then another pattern is at play and we will need to reassess the wave picture.

Bottom line, we cannot rule out higher crude oil pricing. A bias towards lower pricing and a retest of the $50 low is maintained so long as crude oil remains below $60.12. 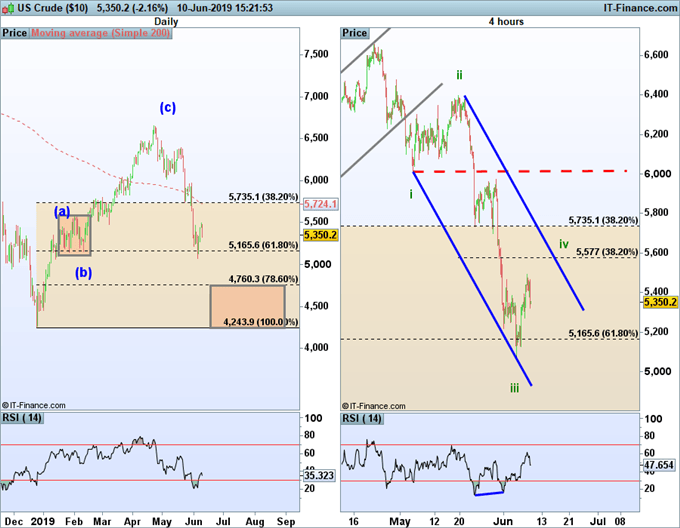