Anti-fiat gold prices experienced the worst week since the beginning of March, weighed down by a stronger US Dollar. The precious metal also concluded its most disappointing month since August as we head into the first day of April. Looking at the monthly chart below, March left behind the completion of an evening star bearish reversal pattern.

In the beginning of 2016, the inverse of this candlestick formation, a morning star, preceded a climb of about 20%. Keep in mind that past performance is not indicative of future results, and candlestick patterns ideally require confirmation. As such, if April turns out to be another sour month for gold, we may see a dominant downtrend ensue in the medium-to-long-term scenario. This would fit the forecast in last week’s fundamental outlook.

Looking for a fundamental perspective on gold? Check out the Weekly Gold Fundamental Forecast. 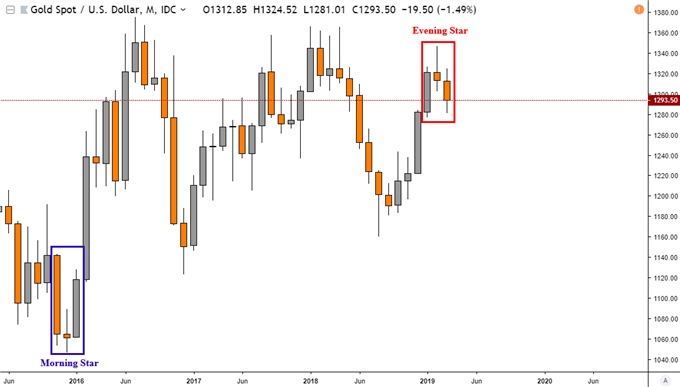 In the interim, the technical picture is not quite as clear. Zooming in on the weekly chart, it is tempting to call the recent candles a falling three method pattern (red box on the chart below). This is typically a bearish formation, but it needs to form in the middle of a downtrend. In this situation, it has formed at a potential top, invalidating the setup. 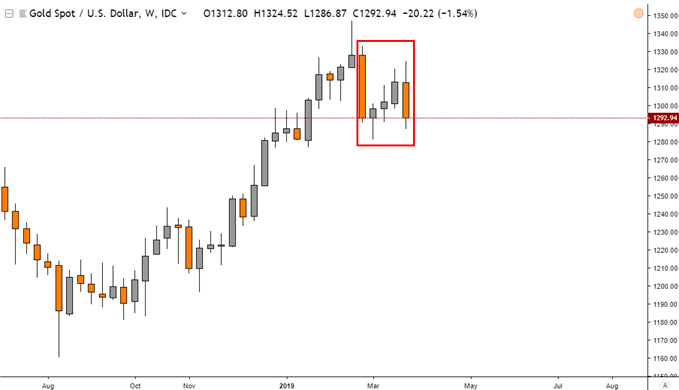 With that in mind, let’s take a look at the daily chart. Last week, gold prices fell under a near-term rising support line from March 7th. This is after failing to breach falling resistance from gold’s top in February, which occurred after a formation of an evening star. While the drop in the last week of March was impressive, it stopped short of breaching the range of support between 1276 and 1285.

If this area holds in the week ahead, we may be due for another retest of the falling trend line from February. This opens the door to consolidation between horizontal support and descending resistance. I have highlighted this as the green triangle on the chart below. Clearing the floor opens the door to testing the next area of support at 1260, a psychological level going back to October 2017. This may be the path of least resistance if the technical signals prevail in the long run. 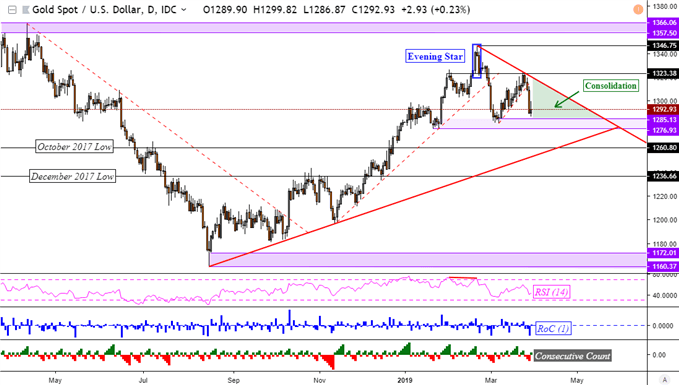