The US Dollar outperformed against its major counterparts on Thursday amidst a pickup in local government bond yields. This may have been because of rosy domestic economic data. Below, US PPI largely surprised to the upside, countering the trend of increasingly dismal surprises seen in data as of late. Meanwhile, jobless claims fell to their lowest since 1969.

In this case, gains in bond yields reflect ebbing dovish Fed monetary policy expectations. Fed funds futures are pricing in about a 50% chance of a cut by the end of this year. Combining this with a stronger US Dollar resulted in the worst day for gold prices in two weeks. The anti-fiat yellow metal has been tending to increasingly inversely track the Greenback as of late.

Because of its performance, gold nearly wiped out all its gains over the past three days after failing to breach the falling resistance line from late February. XAU/USD remains in consolidation (green area on the chart below), stuck above support which is a range between 1276 – 1285. However, the monthly chart reveals that the next dominant trend in gold prices may be lower. Keep a close eye on the psychological barrier immediately below. 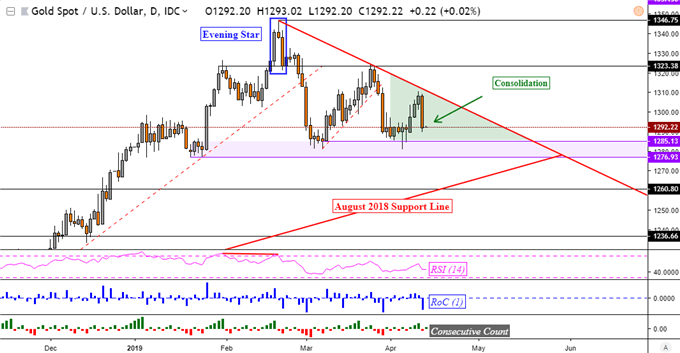 Unsurprisingly, reduced Fed rate cut bets did not bode well for US equities. The S&P 500 spent most of its day trading lower. However, because of a gap to the upside, it ended the day little changed. Overall, the pro-risk Australian and New Zealand Dollars weakened, partially due to the superior-yielding Greenback and hesitation in global benchmark stock indexes as expected.

Speaking of NZD, the currency is aiming narrowly lower in early Friday trade after a couple of disappointing local economic data. This ranged from house sales, to business manufacturing PMI and to retail card spending statistics. But that isn’t the only thing that may weigh against the sentiment-oriented currency over the next few hours.

At an unspecified time during Friday’s Asia Pacific trading session, Chinese trade data is anticipated to cross the wires. If it outperforms or doesn’t disappoint, it would continue following the trend of rosy economic data surprises as of late according to the Citi Surprise Index. This may be overshadowed by declines in equities though as the Nikkei 225 digests Wall Street’s performance this past session. 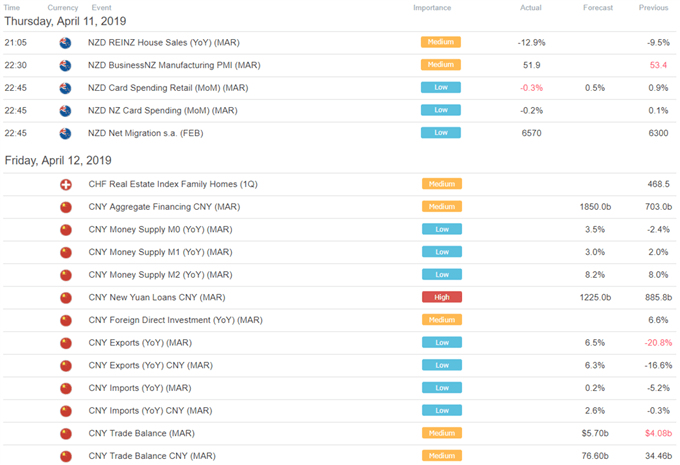