The British Pound underperformed against its major counterparts on Tuesday, pressured by the latest Brexit headlines. Reports crossed the wires that talks between UK Prime Minister Theresa May and Opposition Leader Jeremy Corbyn stalled, putting pressure on the nation after recently having gained a withdrawal extension until October 31. This leaves Sterling at risk if signs of negotiation limbo continues.

Weakness in GBP allowed for the US Dollar to gain ground after declining in the lead-up to Wall Street market open. Around this time, US front-end government bond yields started rallying shortly after the United Health released its earnings report. Its earnings per share (EPS) beat expectations and the company increased adjusted EPS estimates for the remainder of this year.

A combination of US Dollar gains and a rise in local bond yields acted as an adverse double whammy for anti-fiat gold prices. This is because the commodity has no interest-bearing qualities, leaving it vulnerable to a stronger Greenback and lower government bond prices. Technical warning signs do hint that it might be readying to extend losses from gold’s peak in February.

XAU/USD dropped over 0.8% on Tuesday, extending its losing streak to four days which is the longest since early March. The precious metal has just barely cleared a range of support between 1285 and 1276. As such, this may open the door to further losses after the formation of a bearish Evening Star in late February. Near-term support appears to eb the rising trend line from August around 1260 at the time of this writing. 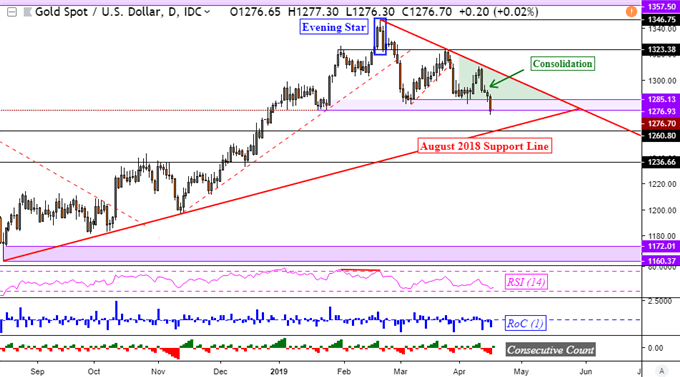 The pro-risk New Zealand Dollar is off to a troubling start on Wednesday following a worse-than-expected local inflation report that increased RBNZ rate cut bets. S&P 500 and Nikkei 225 futures also declined, perhaps on rising concerns of dovish turns in major central banks as global growth slows. This will next be tested on upcoming China first quarter GDP which I will be covering LIVE.

Data out of the world’s second-largest economy has been tending to increasingly outperform relative to economists’ expectations. If this is the case later today, this may inspire some market confidence and send equities higher after a mixed session on Wall Street overall. As such, the anti-risk Japanese Yen is at the mercy of equities and how market mood develops in the near-term.