Coming off a week of remarkable volatility for assets like US indices and key technical developments like the Dollar’s breakdown, gold still stands out. The precious metal started a move back on Thursday March 30th that cleared modest technical congestion and pressed on to overtake levels with far greater speculative weight to them. While the market’s pace may have flagged through the second half of this past week, the progress has yet to find its cap. Following the best week’s performance in three years and a remarkable 8 consecutive session climb to boot, we now face levels of resistance that are five years in the making. That same ceiling may very well represent the gateway to a systemic reversal that could restore bullish interests back to levels not seen since the market’s incredible climb to record highs between 2009 and 2011.

Starting our chart analysis of gold, we can get a significant overview of the recent charge simply from the daily chart. Beginning with the previous week’s clearance of a modest range high of 1,288, the momentum immediately caught the bulls’ sails. The biggest two-day rally since early October (when risk trends suddenly collapsed) readily cleared a three-month trendline resistance and the 100-day moving average which coincided at 1,295. Despite the difficulty in maintaining trends in most corners of the financial system recently, the commodity continued its coast all the way back to the swing high set on February 20th – a peak the markets haven’t been able to trade above since April 2018. There is certainly weight to this lonely technical summit, but the real headwinds to bulls’ ambitions are just a little higher and established on patterns on a much grander scale. 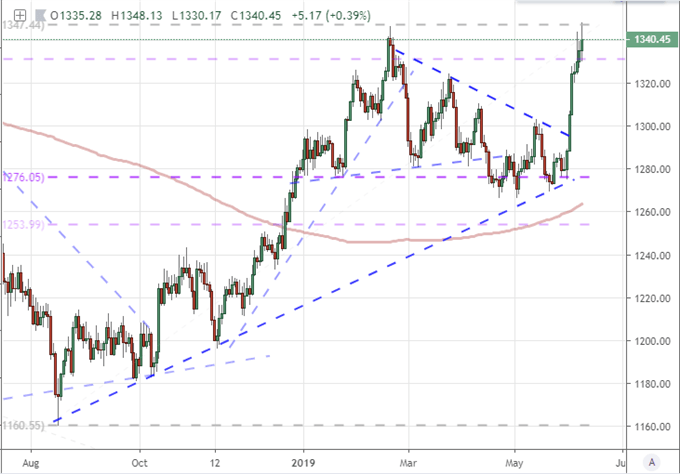 Before we increase the time frame, it is worth considering the momentum. Like the physics of inertia, if there were no technical points of friction; the market could very well extend its run until serious chart boundaries slowed the drive. Regardless of another sizable bearish tail (or upper wick), the market secured its eighth consecutive daily advance through Friday. That matches the longest climb since the similar move through the opening days of 2018. To find a climb longer than this, we have to wind the clock all the way back to April 2016. A word to the wicks created from the intraday reversals this past week from peak highs. There is clearly some groaning behind the conviction as momentum riders book profit and shorts put their skepticism into action. However, Wednesday’s wick was tail was the largest we’ve seen in 14 months and the market still carried through the subsequent two trading days. Look to see whether the market’s are willing to pick up the conviction in momentum following the weekend liquidity drain on Monday as an important speculative litmus test. 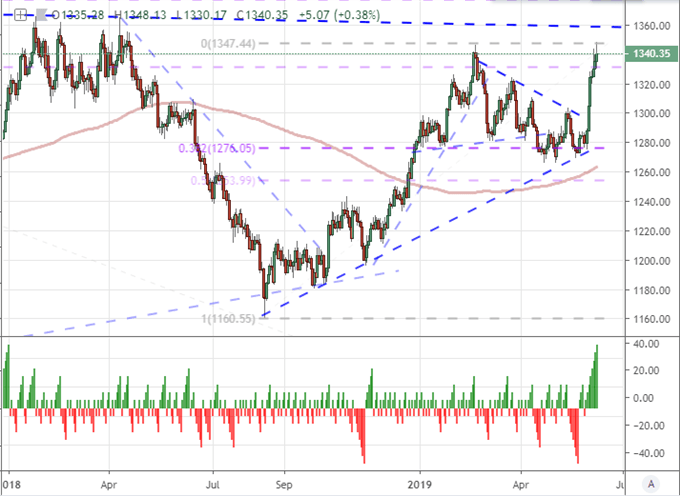 If the bulls end up losing their dominance into next week, the same figures of resistance the market so easily sliced through on the way up will step back in as immediate support consideration. That said, the severity of the recent upswing would likely make it fairly easy for the traders to traverse a move between 1,280 to 1,350 with relatively little need to mount serious conviction. To plot an extension for bulls from its recent heights, we really don’t get the scope for what lies ahead unless set to a higher scale. While the swing high from earlier this year is prominent, a far more commanding resistance arises from a series of descending peaks over the past five years which currently settles around 1,360. It could be argued that this is a ‘neckline’ to an inverse head-and-shoulders pattern following the drop from the 2011 peak to 2013 (and continuing through to the congestion portion of the pattern into late 2015). This trendline began around 1,380 which is also where the 38.2% Fibonacci retracement of the 2011-2015 bear wave happens to stand. 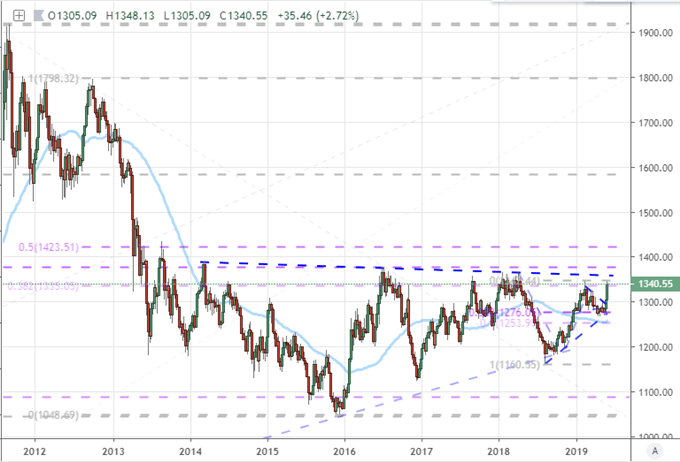 Clearing such an obviously influential technical barrier is not a small feat. It requires a conviction for which momentum alone would seriously struggle. Looking for a fundamental charge easily spotted in the charts, we can consult financial market volatility. Gold is a haven asset when markets are unsteady – though it seems there is more ill-deserved speculative enthusiasm at present than concern owing to expectations for central bank support and a turn in persistent trade war tensions. We could reference implied activity measures on a host of assets, but I think the metal’s own derivative is most interesting. Normally, we expect the underlying asset to move inversely (in the opposite direction) to its volatility reading. That isn’t the case with a haven like gold. Another hearty drive higher could offer a significant enough shove that we could clear key resistance. 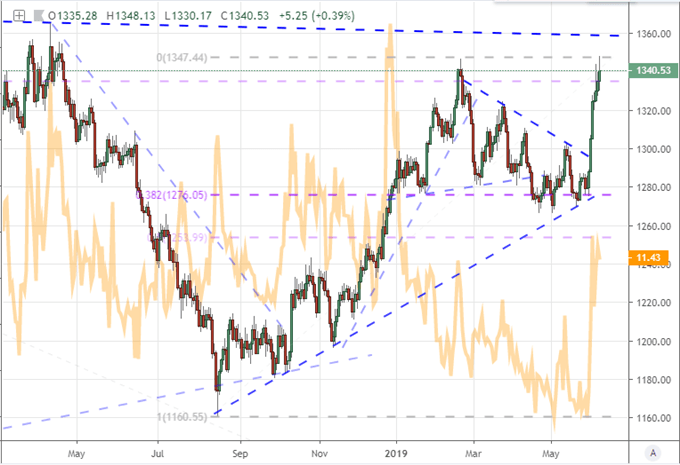 Where the real potential for the metal lies is not in the straightforward rise and fall of risk trends but rather the more unique appeal it holds as an alternative to benchmark financial assets – like currencies. Where does capital go when there is a flight from the world’s largest sovereign debt (US Treasuries, German Bunds, UK Gilts, etc) and in turn their respective currencies? There are few alternatives that have precedence, but the gold has acted in this role on and off for centuries. It can be difficult to show this anti-currency appeal, but a good means of reflecting upon it at present is through interest rate expectations from the Federal Reserve. As the market predicts easing from the world’s largest central bank, it is in turn anticipating a devaluation of the currency through the ramp in supply that such a move would suggest. And, if the Fed is doing it, most of the world’s policy groups will be following suit. Below, we have the Fed Funds futures contract value (implied yield is the mirror) overlaid with gold. 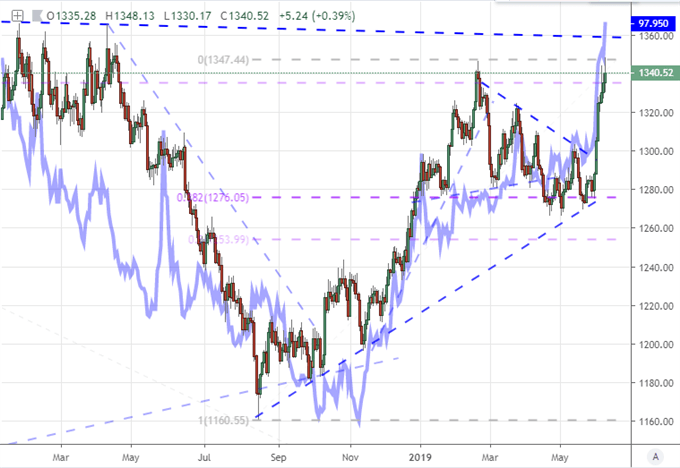 To answer any concerns that the above may simply be a reflection of a recently weakened Dollar – though that trend is only very recent – below is a measure of gold priced in an equally-weighted index of Dollar, Euro, Pound and Yen. The same congestion pattern emerges. What’s more, the resistance to this band is horizontal compared to the bearish slope of gold simply measured in Dollar. That doesn’t confer any greater technical weight/influence to this synthetic though as no one is really using it as a catalyst like they would the benchmark XAUUSD. 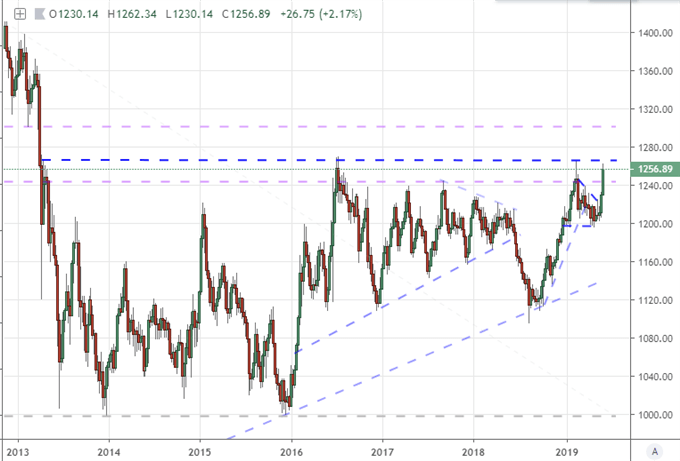 With the market on the cusp of a potential enormous reversal for gold, how are participants positioning? From the speculative futures group, we find the slower and more deliberate crowd holding its heaviest net long position since the beginning of 2018, but there is far less of the speculation of an impending systemic reversal that what we witnessed in the run in 2016 and even the late 2017 failed attempt. This could catch the market wrong footed if there is in fact a break and provide some volume to carrying it higher. From the retail crowd, we find in the IGCS reading that the seemingly permanent bullish interest has dropped to a near-neutral position. We haven’t seen this in years. It is difficult to miss the range top we discussed above, but trading against it with everything developing on the fundamental side is brash. 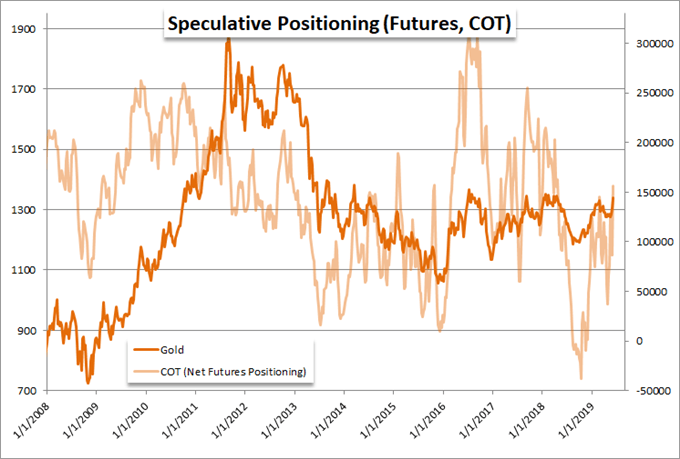 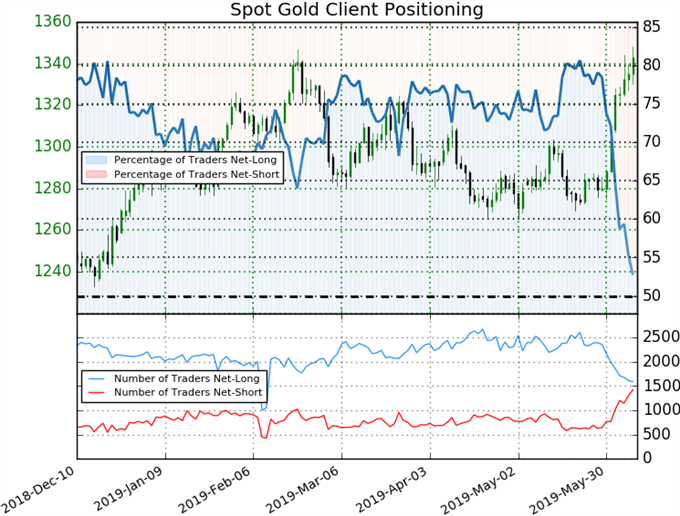